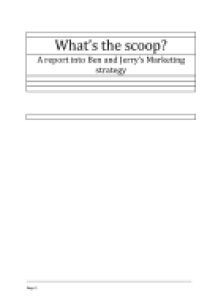 ï»¿What’s the scoop? A report into Ben and Jerry’s Marketing strategy ________________ Ben & Jerry’s is one of the leading brands within the frozen dessert market due to a variety of factors. This report will look at those factors exploring the concepts behind each one to justify its position within the market. The company was founded in 1978, Vermont, USA where Ben Cohen and Jerry Greenfield opened their first Scoop Shop in a renovated gas station. Since then over 300 more have opened within the USA, and the company has branched out into the international market with Scoop Shops in 34 different countries including the UK, Australia and Singapore. In 2000 Unilever, the world’s largest ice cream producer and current market leader bought Ben & Jerry’s for just over £169m. As part of the takeover deal it was agreed that Ben Cohen and Jerry Greenfield, would still manage it brands integrity and watch over its social mission. One of the main factors of the brands success is placed within its marketing strategy. Ben & Jerry’s marketing mix provides a range of controllable aspects in which used to meet with the target audience. The main element of this marketing mix lies within the product itself, a luxurious treat with a variety of exciting and unique flavours, along with the brands social and economic mission. ...read more.

Ben & Jerry’s occasionally introduce offers such as ‘buy one get one free’ or money-off promotions usually within larger supermarket chains. These are cleverly devised within the marketing mix and only last for a limited amount of time, they increase consumer demand and are sometimes used when a new flavour is launched. Ben & Jerry’s sometimes create limited-edition campaigns when a specific event is taking place, in the US ‘Butter Pecan’ was renamed ‘Yes, Pecan!’ to mark Barack Obama’s inauguration as President of the USA, this was due to his campaigns uniting theme being ‘Yes, we can!’ Not only was the flavour renamed, Ben & Jerry's donated proceeds from the sales of the flavour within January to the Common Cause Education Fund. See appendix 1a for an image of the campaign. All of these aspects together have been used specifically to create this successful marketing mix, allowing the brand to be one of the market leaders, especially in the UK. Passport GMID confirms this, with Table One showing the brands shares within the UK ‘take-home’ sector, in which it has remained the market leader since 2007. Table One % retail value Company 2007 2008 2009 Ben & Jerry's Ben & Jerry Homemade Ltd 11.36 12.72 14.62 Carte d'Or Unilever UK Ltd 11.00 11.43 11.29 Häagen-Dazs General ...read more.

Another article, Culture Change from the January/February 2003 Issue of Mother Jones states ?Unilever no longer gives 7.5 percent of Ben & Jerry's pretax profits to charity.? Despite these weaknesses, there are many opportunities for Ben & Jerry?s, with today?s health conscious society, the introduction of more frozen yoghurt and low-fat ice-cream would allow the brand to expand into a new sector of the market. According to Euromonitor International, ?Ice cream's performance was underpinned by warm weather conditions and robust demand from wealthier consumers?, this means they will able to afford premium ice-cream. The article also states ?in 2009 Iran, Israel and Saudi Arabia, accounted for around 50% of total ice cream retail value sales in the Middle East and Africa region? this is a great opportunity for Ben & Jerry?s to expand their international market, with current operations launching in Israel, more could be opened within the Middle East. However being self-aware as a brand not only looks at opportunities but also at threats, the most recent of which has been the current economic downturn, which means consumers have less disposable income to spend on premium products. Although the recession threatens the brands profits, the main threat comes from major competitors such as Nestle and Haagen-Dazs. According to the Passport GMID table ?Take-home Ice Cream Brand Shares 2006-2009? used earlier, Haagen-Dazs is Ben & Jerry?s main competitor within the super-premium sector. ...read more.