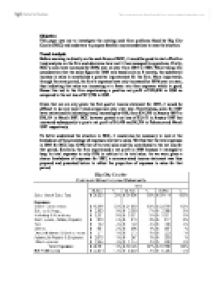 Objective This paper sets out to investigate the existing cash flow problems faced by Big City Courier (BCC) and endeavors to propose feasible recommendations to ease the situation. Trend Analysis Before zooming in directly on the cash flows of BCC, it would be good to start off with a trend analysis on the firm and determine how well it has managed its operations. Firstly, BCC's sales have increased by 296% year on year from 1995 to 1996. While taking into consideration that the sales figure for 1995 was based only on 8 months, the substantial increase in sales is nonetheless a positive improvement for the firm. More importantly, through the same period, the firm's expenses have only increased by 193% year on year, thus indicating that sales are increasing at a faster rate than expenses which is good. Hence this led to the firm experiencing a positive net profit of $26,836 in 1996 as compared to the net loss of $17,789 in 1995. Given that we are only given the first quarter income statement for 1997, it would be difficult to do any major trend comparison year over year. Nevertheless, sales for 1997 have maintained an increasing trend, increasing by 61%, from $24,330 in January 1997 to $39,114 in March 1997. BCC however posted a net loss of $2,451 in January 1997 but recovered subsequently to post a net profit of $4,408 and $6,326 in February and March 1997 respectively. ...read more.

This could be a major concern as it means the firm is not collecting back its receivables fast enough while it continues to incur expenses every month. This could be the most likely reason explaining BCC's cash flow problems. Cash Flow Analysis Cash is certainly vital for survival for every firm in any industry and in this section; we attempt to come up with BCC's yearly cash flow statements for 1995, 1996 and monthly cash flow statements for the first quarter of 1997 to better understand the cash situation of BCC. These are shown below. The cash flow statement for 1995 reflects that of most start up companies, where they often have a negative net cash flow from operating activities and investing activities. Interestingly, in 1996, it can be seen that BCC had a positive net cash flow of $16,093 from operating activities, led by a positive net income and the increase in sales tax payable. However for the same period, BCC did not experience any increase in its cash and cash equivalent position. The main reason for this lies in the decrease in capital for that year, falling by $18,426. We have to look closer into the monthly cash flow statements for 1997 to ascertain the cause for the decrease in capital. Before proceeding further, it has to be noted that while the balance sheets for January and February 1997 showed no cash balances, it was however reflected in the above cash flow statements that there is a deficit of $1 in January and a positive $1 in February. ...read more.

* BCC could also revise its current time frame of paying its drivers. As it is clear for now that the firm is unable to collect back each receivable within 2 weeks, it could consider negotiating with the drivers to perhaps pay them on a monthly basis instead of fortnightly. This would create an additional buffer for the firm for them to attempt to collect them its accounts first before paying the drivers instead of relying on its overdraft facilities so often to offset for the drivers' commission. * Mr Geoffray should contemplate not withdrawing the firm's earnings every month as he is the owner of BCC after all and it might be better if he reinvests the firm's earnings back into the firm to span further expansion. * BCC has to also improve its control on its expenses and try to maintain consistent expenses which are lower than their net sales. This would help ensure that the firm to experience positive net profits every period and hence a greater likelihood to improve its cash flows. * BCC should restructure its debt structure which appears to be relatively risky now with the continual withdrawals of capital and increasing liabilities. The firm should look into ways to reduce the sales tax payable figure as it is building up significantly. * BCC should also look into ways to expand its business, like increasing the number of salesman or investing in more fixed assets which are beneficial to the operations of the business. ?? ?? ?? ?? Big City Courier 3 ...read more.