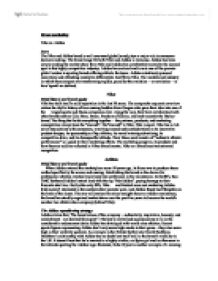 Brand marketing Nike vs. Adidas Intro The Nike and Adidas brand is well renowned globally and plays a major role in consumer decision making. The brand image for both Nike and Adidas is immense. Adidas has been slowly eroding the market share from Nike and Adidas has comfortably moved to the second spot in this highly competitive industry. Adidas has evolved and is now one of the premier global leaders in sporting brands offering athletic footwear. Adidas relentlessly pursued innovation and refreshing content to differentiate itself from Nike. The markets and industry in which they compete are transforming rapidly, paced by the evolution - or revolution - in how 'sports' are defined. Nike Brief history and brand equity Nike has built itself a solid reputation in the last 30 years. The company's corporate overview relates the idyllic history of two running buddies from Oregon who grew their idea into one of the largest sports and fitness companies ever. Along the way, they have collaborated with other brands such as Cole Haan, Bauer, Freedom of Choice, and most recently the Hurley brand. The thing that holds everything together -- the partners, products, and marketing concepts has always been the "swoosh". The"swoosh" is Nike; Nike is sport. Nike has a rich set of associations with consumers, revolving around such considerations as its innovative product designs, its sponsorships of top athletes, its award winning advertising, its competitive drive, and its disrespectful attitude. Their three-word mantra of "authentic athletic performance" is a guide to their marketing efforts. ...read more.

Nike has earned this top of mind position by its rich set of associations with consumers, its innovative product designs, its sponsorships of top athletes, its award winning advertising, its competitive drive, and its disrespectful attitude. Nike has managed to foster its sales by creating an emotional link with its audience, and successfully balanced the delivery of functional benefits with emotional ones. 2. Dell & Apple Dell Positioning and target markets Dell is the king of direct selling. Dell's business model is to sell PCs direct, whether by phone or online, and that straightforward strategy considerably focuses the company and its image. The PC maker plans to remake itself into a bigger, fiercer competitor by selling servers and high-end services to businesses, and by moving into new consumer PC markets around the world. The company will continue to expand into product areas such as servers, networking, and storage while it sustains its PC business. The company is working to expand the offerings of its services arm, Dell Technology Consulting, in a variety of ways, including partnerships, organic growth, and acquisitions focused on Microsoft and Linux software. Dell has also redoubled its efforts to sell computers to large corporations. All the while, Dell plans to hold onto its role as the pied piper of the PC market by continuing to lead customers away from its competitors. Traditionally, Dell has stayed away from the sub-$1,000 retail PC fray. However, during 2001, it expanded its efforts in the U.S. ...read more.

Sean Combs is today an owner of a multimillion conglomerate incorporating his own successful career as P.Diddy, the rapper, CEO of Bad Boy Worldwide Entertainment Group (BBWEG) and owner of the successive fashion line, Sean John. BBWEG's span of operation includes music recording, music publishing, artist management, television and film production, marketing and advertising, apparel and restaurants. He also is giving back to society through different events and programs such as Daddy's House Social Program that create educational programs and initiatives for inner city youth. In 2003, Sean Combs decided to run the New York City Marathon for charity. This event was televised and broadcasted at primetime. The goal was to raise money to support the education and health needs for children. In my opinion, a more visible brand, and a brand that spans over so many different kinds of industries and media channels (television, press and radio) and in so many various settings, is hard to find. He is staring in his own produced music videos, he is frequently on the covers of the world's most famous magazines such as Rolling Stone, and he receives media attention through his various community services and his upscale private life. He even has his own reality show on MTV, which is promoting the bands on his own record label. I can't say anything else than that Sean Combs is a very savvy marketer and businessman. He knows how to sell his brand, himself, and he has media in the palm of his hand. These days, everything that he seems to set his mind on, is succeeding. ...read more.