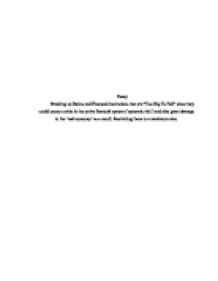 Breaking up Banks and Financial institutions that are Too Big To Fail since they could cause a crisis in the entire financial system (systemic risk) and also great damage to the real economy as a result.

Essay Breaking up Banks and Financial institutions that are "Too Big To Fail" since they could cause a crisis in the entire financial system ('systemic risk') and also great damage to the 'real economy' as a result. Restricting them to a maximum size. There are two main types of lack of information, which occur in the financial system. They are adverse selection and moral hazard. Adverse selection is the problem which appears before the transaction. It means that people who intend to take on excessive risks seek out loans most actively and can be selected with high probability. That is why some lenders may decide not to make loans at all. Moral hazard is the problem which occurs after the transaction. This is the risk that the borrower after getting money will engage in activities which are very risky and which are undesirable for the investor. Such problems may freeze the whole financial system and lead to the systemic risk. One of the possible reasons for the appearance of the moral hazard is the existence of a government safety net. This measure is created for saving banks and other financial institutions for preventing their failure. There are two main ways to handle the failed bank. ...read more.

As for the depositors, they will be sure that all their money won't be lost, that is why they won't be interested in monitoring the bank's activities closely and in pulling their money out if the bank if it engages in risky deals. And banks are more likely to take on greater risk. One of the possible ways to avoid such problems is to decrease the incentive of the government to bailout these institutions. That means that some policy measure should be created which reduce the existing costs to the whole financial system of their failure and mitigate spillover effects. In this situation depositors will worry about the activities of the bank and will monitor it. And in the case of excessive risk taking they will pull their funds from the bank. As a result these movements will reduce moral hazard. One more problem created by too large financial institutions is resource misallocation. When bankers know that their bank will be saved by the government they are not likely to operate in a cost-efficient manner and, obviously, they are not interested in research and development. Such behavior stalls the technical progress. In addition, some banks grow in size, because they just want to get special subsidy, which is given to too big to fail banks. ...read more.

The too-important-to-fail conundrum: Impossible to ignore and difficult to resolve//IMF staff discussion note, 2011. 4. Shull B. Working Paper No. 601. Too big to fail in financial crisis: motives, countermeasures and prospects//Levy Economics Institute of Bard College, 2010. 5. Mishkin F. S. How big a problem is too big to fail? A review of Gary Stern and Ron Feldman's "Too big to fail: the hazards of bank bailouts"//Journal of economic literature, vol. XLIV (December 2006), pp. 988-1004. 6. Baker D., McArthur T. The value of the "Too big to fail" big bank subsidy//Center for economic and policy research, 2009. 7. John D. C. Using bankruptcy and capital standards to address financial institutions that are "Too big to fail"//Backgrounder, 2009. 8. Morgan D. P., Stiroh K. J. Too big to fail after all these years//Federal Reserve Bank of New York, Staff reports, 2005. 9. Final report of the Commission of Experts for limiting the economic risks posed by large companies, 2010. 10. Wiwattanakantang Y., Souma T., Suzuki K. Banking in Japan: Will "Too big to fail" prevail? //Center for economic institutions, Working paper series, 2002. 11. Bernanke B. S. Causes of the recent financial and economic crisis//Testimony, September 2, 2010. 12. The Economist. What's too-big-to-fail worth? December 8, 2009. 13. The Guardian. Too big to fail. July 15, 2008. 14. Forbes. Too big to fail? Key corporate governance reforms for the world's biggest banks. November 22, 2011. ...read more.