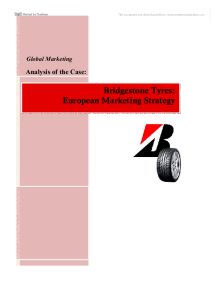 Bridgestone, the world second largest tire manufacturing company in the world is headquartered in Tokyo, Japan. It owns 20% of worldwide market share. It is engaged in the production of other rubber products which include tubes for various machinery and contruction equipment. The company is operating at a global scale and competes with the worlds largest tire manufacturers, the likes of Michelin, Continental and Goodyear. Although it does own 20% of worldwide market share in the tire industry, it owns a lower market share of 10% in Europe due to the strong presence of Michelin and Continental. Bridgestone is the leading supplier to the F1 grand prix which reflects their trust in the quality of their product. In 1988 Bridgestone acquired Firestone, which was targeted to the mid range segment Bridgestone continues to internationalize and develop ways to tackle the European market. Q 1 - Competitive strategies of Michelin, Continental and Goodyear Michelin: Michelin owns 32% of the European market share for tires. It however plans to improve its productivity in Europe by 20% in the next 3 years. It is therefore expecting to accomplish this by developing its products, service and multibrand policy. Also by, restructuring all its European activities. (Hollensen, 2011) In hopes to promote growth and strengrthen its marketing strategies, Michelin may emphasize on the differentiation on its products and services in the European market, in order to serve to local demand of tires, and therefore increase European market share. ...read more.

(Paddock Talk, 2009). Today Formula One has 20 races per season with 8 of them that take place in Europe. We believe one of the alternative competitive strategies that Bridgestone could pursue is to use participation in Formula One as its competitive advantage not just within the events hosted by F1, but also outside of those. It should use Paddock Clubs (a VIP hospitality facility) and overall F1 experience more aggressively to build closer relations with key customers in each country. What Bridgestone suffers mostly from is its low brand awareness in most of the European countries. In the United Kingdom only 10 percent of the people asked remembered Bridgestone Brand. We think Bridgestone will gain form marketing its brand not just as a great tyres maker, but as the sole manufacturer for Formula 1 bolids. There is historical data shows that "in 1996 when the company became a partner of F1, Bridgestone's brand recognition in Europe's five largest countries was 13%, but by 2003 it had risen to 34%" (Bridgestone Motorsport, 2010). Since 2008 Bridgestone has become a sole supplier of tyres to the FIA Formula One World Champion. This allowed the company to increase its global brand awareness "as the BRIDGESTONE logo appeared on television broadcasts beamed live around the world" (Bridgestone Motorsport, 2010). We think the company should aggressively promote itself as a sole manufacturer for Formula One drivers due to its highest quality and safety. ...read more.

Apart from Bridgestone's international exposure and experience. A criteria which ranks highly in many aspects, is resources and core competences. As Bridgestone already operate internationally, it is clear that they do have sufficient resources to cater to the globe. It is key however to allocate these resources efficiently when further expansion takes place. Assuming that a surge of demand for the product happens, quick response to customers is required. Looking further into core competences, which are the skills and knowledge the firm possesses, that allows them to market their products and services in different regions. Bridgestone have fundamental management policies in which the firm abides by, these aim for a global corporation and are based on a clear long term strategy. Question 4: Proposal for Bridgestone's distribution and communication strategies We are going to look at the European market excluding Germany and France in order to identify which distribution channels the company should use and how should it communicate with the consumer. Distribution channels suppose to serve as a link between the producers and the end user. Bridgestone can either set up their products at the most expected places such as car shops and other particular outlets, or the company can arrange their distribution approach totally different form competition and possibly turn it into a competitive advantage, but this path would be hard to walk. Bridgestone could either take an easier approach and standardize the promotion mix and the channel design worldwide, or to adapt it to the environment of each country. ...read more.