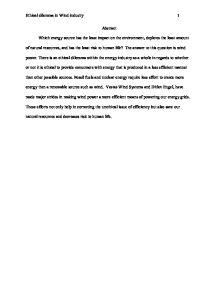 Abstract Which energy source has the least impact on the environment, depletes the least amount of natural resources, and has the least risk to human life? The answer to this question is wind power. There is an ethical dilemma within the energy industry as a whole in regards to whether or not it is ethical to provide consumers with energy that is produced in a less efficient manner than other possible sources. Fossil fuels and nuclear energy require less effort to create more energy then a renewable source such as wind. Vestas Wind Systems and Ditlev Engel, have made major strides in making wind power a more efficient means of powering our energy grids. These efforts not only help in correcting the unethical issue of efficiency but also save our natural resources and decreases risk to human life. Wind power: Is it the best choice? There is a debate within the energy industry as to which source should be used to power the largest part of our energy grids. Consumers want the most efficient source of production and distribution because that means the lower cost to them. This leads to the debate on whether or not its ethical for producers of wind energy to continue to move forward with trying to make wind a more dominate source of powering our grids. If there are more efficient ways to produce larger amounts of energy and distribute it to the population, then in the best interest of the consumer, is it the most ethical to use those sources instead of a renewable such as wind? There are large corporations that are lead by individuals who believe that inefficiencies are not, and should not be, the largest concern when considering the production and distribution of energy. We must consider other, more relevant, issues such as the depletion of our natural resources, the pollution of our atmosphere, the risk to human health, and who is paying the overall "cost" of our energy consumption now. ...read more.

The Bureau of Land Management, the Department of Defense, the U.S. Fish and Wildlife Service, the U.S. Forest Service, the National Telecommunications and Information Administration, and the Federal Aviation Administration all have their own legal restraints applicable to the production of wind energy. As an example, the FAA requires a ten-mile radius from any airport when building a wind farm of any type. Another example is the the U.S. Forest Service requires wind producing companies to survey and monitor wildlife within the confines of the property that houses wind turbines. The combination of all these different laws makes the legal restraints extremely complex. (Wind and Hydropower, n.d.) In addition to the federal legal restraints there are also state requirements that add to the complexity. Each state has its own renewable portfolio standard (RPS) that it uses to guide regulation and standards for wind production within that particular state. In the United States there is no 2 RPS that are the same. Some factors that differ among state RPS's are cost recovery by utilities, penalties for non-compliance, and resource eligibility. Different states allocate different amounts of money to dedicate to renewable energy projects and states also set different goals. For example Arizona's RPS goal is 15% by 2025 whereas Colorado's is 20% by 2020. (Renewable portfolio, n.d.) The four main differences among state RPS's are zoning bylaws, safety and technical requirements, environmental assessments, and liabilities and insurances. Each state, or even county, may require different zoning permits for construction of wind turbines in a certain area. Along with land zoning permits, different states require different electrical inspections and have different electrical requirements. If operating large wind turbines, environmental surveys may need to be conducted prior to construction and possibly during cycle use, depending on what state you are in. There are also differences in the insurance that is required throughout states. Some require more and some require less. ...read more.

(No. 1 in modern, n.d.) Action Plan My desired vision would be an overall acceptance and implementation of wind power as the main source of powering our planets energy grids by 2025. Ideally I would have renewables completely replace all sources of fossil fuels (coal, petroleum, and natural gas) with wind power sourcing somewhere between 40-60% of energy grids. This would completely eliminate CO2 emissions into our atmosphere as well as discontinue depletion of our natural resources in terms of electricity production. If we do not make extreme strides in eliminating CO2 emissions and conserving our natural resources, the future generations of the life on this planet will inevitably pay for our inaction. Accomplishing this goal would need several global efforts, occurring simultaneously. First we would need a governing document that outlines, in detail, the commitment from all country leaders to the elimination of fossil fuel use to power energy grids. This document would also contain accountability clauses outlining the guidelines for the implementation process and audit agreements for continued operations. Also included would be corrective actions for non-compliance. Every country would need to show adherence with this charter by 2015 to allow ten years for construction of wind farms and conversions of energy grids. By 2015 we would also need to re-organize government funding for renewable energy projects. Government contracts would be created globally and bid out to wind power companies for construction, maintenance, monitoring, and upgrading of wind farms in different countries. A new global energy commission would be put into place with representative's form each country. This commission would be used to regulate and monitor compliance of all global energy efforts. Measurements in 2025 would be clear. Compliance of all countries around the world could easily be gauged by reviewing the governing document. The commission that will be created will measure success with initial audits that will begin in 2025 and completed every 2 years after to confirm that 40-60% of a countries energy is being produced by wind power. ...read more.