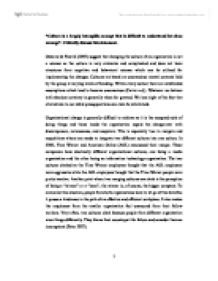 Can Culture Be Managed?

"Culture is a largely intangible concept that is difficult to understand let alone manage". Critically discuss this statement. Osborne & Plastrik (1997) suggest that changing the culture of an organization is not a science as the culture is very extensive and complicated and does not have structures from cognitive and behavioral science which can be utilized for implementing the changes. Cultures are based on unconscious mental contexts held by the group at varying levels of bonding. Within every culture there are established assumptions which tend to become unconscious (Carter n.d.). Whatever we believe with absolute certainty is generally taken for granted. We lose sight of the fact that alternatives to our stable presuppositions can even be entertained. Organizational change is generally difficult to achieve as it is the accepted style of doing things and those inside the organization regard the change-over with discomposure, nervousness, and suspicion. This is especially true in mergers and acquisitions where one needs to integrate two different cultures into one culture. In 2000, Time Warner and American Online (AOL) announced their merger. These companies have drastically different organizational cultures, one being a media organization and the other being an information technology organization. The two cultures clashed as the Time Warner employees thought that the AOL employees were aggressive while the AOL employees thought that the Time Warner people were pretty inactive. Another point where two merging cultures can clash is the perception of being a "winner" or a "loser", the winner is, of course, the bigger company. ...read more.

Similar concept is followed to give other awards like employee of the year award, best delivery person of the year, best sales manager of the year, ubharta sitara award (given to the new recruitment) and outstanding manager of the year (The 5F culture at Zensar, n.d.). According to Smiricich's research (1983a, cited in British Journal of Management, Vol. 9, 1998) cultural management can be classified into three groups. One group says that culture can be managed as it is variable. Members of this group believe that culture is an organizational variable and thus can be changed. A significant aspect of cultural research by them has been the management's attempts to control and change the culture. Bate, 1994; Bowman and Faulkner, 1997; Brown, 1995; Dawson, 1994; Silverweig and Allen, 1976 are some useful references to cultural change models. Another group believes that culture cannot be managed directly. They stress on the point that culture is not something that organization has but it is something which organization is. Thus Martin (1985, cited in British Journal of Management, Vol. 9, 1998) says that the culture can be manipulated under certain specific happenings, like change in leadership, during serious financial or some other crisis, during formation, merger, or take-over or other similar instances. They stress on the point that culture is a variable that can be managed indirectly. The third group rejects the view that culture can be managed or it can be manipulated. They emphasizes that the culture cannot be altered consciously but natural changes will take place frequently. ...read more.

Ideas from mechanics were taken to prepare cars and trucks easy for on-road maintenance. Cultural changes take time, and the process is generally difficult. Some get accustomed to it quickly, while others take time. At Chrysler, the management started with engineering, then moved on to customer service, and down to the dealers, and so on and so forth (Zatz 1994). This made for some strange experiences for those who dealt with the company during the change-over times. The media wondered why Chrysler, in the middle of heavy losses, was spending billions on new buildings and assets and research and development. They got their answers years later, when Chrysler got its returns on the investments. Later, the pace of change was slowed due to structural problems, like, independently owned dealership and contradictory viewpoints of many industry insiders. Another problem that came up was the onset of complacency, as winning products, record profits, and high sales erased the sense of urgency that played significant role in maintaining the speed of change. We thus find that culture is a proper tangible concept. If the observer has the vision for it, he can view the basic culture of the organizations around him. These cultures can be seen in their goals and objectives, their working style and the way they respond to the changing environment. Once he can see the culture, he can also understand the reason behind the culture being followed. Also, he can use skill and knowledge to change the culture to take the organization from one level to the other. The power of cultural change is strong enough to turn an "aging dinosaur into a state-of-the-art profit-maker". It may do wonders in your business or institution, as well (Zatz 1994). ...read more.