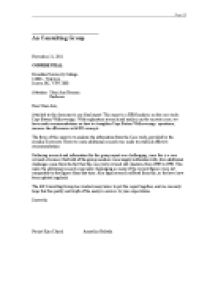 ﻿Page | ________________ _________________ An Consulting Group November 21, 2011 CONFIDENTIAL Kwantlen University College 12666 - 72nd Ave Surrey, BC, V3W 2M8 Attention: Shari Ann Herman Professor Dear Shari Ann, Attached to this document is our final report. This report is a HRM analysis on the case study: Cape Breton Wallcoverings. With exploratory research and analysis on the current issues, we have made recommendations on how to strengthen Cape Breton Wallcoverings operations, increase the efficiencies with HR concepts. The focus of this report is to analyze the information from the Case study, provided by the Arcadia University. However some additional research was made to establish effective recommendations. Gathering research and information for this group report was challenging, since this is a case covered a business that both of the group members were largely unfamiliar with. Also additional challenges came from the fact that the case study covered old situation, from 1989 to 1990. This made the additional research especially challenging as many of the current figures were not comparable to the figures from that time. Also legal research suffered from this, as the laws have been updated regularly. The AN Consulting Group has worked many hours to put this report together, and we sincerely hope that the quality and depth of the analysis answers to your expectations. Sincerely, Navjot Kaur Chacal Annaelisa Huhtala ________________ ________________ Table of Contents Executive Summary Introduction Organizational profile History Location: No of employees: Objectives: Key Individuals: Central issues: Unskilled labour: Inefficient production Uncompleted jobs / need for expansion Lack of HR knowledge: Job Design Situation Job simplification and industrial engineering Motivating potential Job Analysis Recruitment Workers Supervisors Selection: Orientation Training Critique of training Experts Performance management Situation Issues Supervisors? skill Career development Compensation and benefits Wages Benefits Incentives Employee relations Legal issues ESA wages ESA hours Lack of Hr Knowledge and documentation Occupational Health and Safety Labor relations Recommendations Unskilled labor Inefficient production Lack of HR knowledge Expansion Implementation plan Predictions of impact References Executive Summary Introduction The Cape Breton Wall covering is experiencing a number of issues during their first year of operations. ...read more.

Thus the workers can become very protective of their jobs, can act out in a very negative way to their colleagues whose work isn?t up to par. However these sentiments can rise even if the feedback is given privately, because in closed work environment the group is quick to notice the performance of others. Also the ?open Door policy? Hooker encourages is probably quite ineffective as the workers may feel that giving only good news to the management is rewarded, and thus giving bad news is avoided. Also the ?Us versus them? thinking may cause the Cape Breton employees to withhold their ideas, feedback and comments as they may feel that the management wouldn?t listen to them. Supervisors? skill There also an issue of the expertise of the supervisors. The appraisals of the workers is the most important duty for the line managers but neither Chris Wood nor his team of 5 supervisors have any sort of HR training, background or expertise. As such the feedback given by them is subject to ?rater errors.? These include lack of visibility, lack of detailed information of the worker / work in question and different biases. Also issue is that without formal appraisal process or proper knowledge and experience in giving appraisals, the feedback given to employees is not consistent, it could be irrelevant, or include unrealistic standards. This could lead to unfair feedback and thus not all employees necessarily get the same amount of attention. Also there is a question if Chris wood and his team of supervisors ever documented any of the feedback or appraisals given and was the information used for anything. Without proper documentation the company may be in trouble in any of legal cases when a documented proof is needed. Career development According to the current system of the plant the career development path is very clear and linear. Thus the work is tied to clear rewards / recognition of gaining a promotion. ...read more.

The machinery after all is capable of producing much more efficient bathes of products, and the workforce is just learning to use the machinery to its capabilities. This would allow the production get closer to the demand, and even though some deals would need to be turned down, the overhead of investment could be matched. Also keeping the issues small would allow the company to solve them and improve its efficiencies. However, if the expansion is truly the only way to match the investment cots, AN consulting recommends doing the immediate expansion with extreme caution. AN Consulting feels that it would be very risky endeavor, as the investment required for that would increase the over head to over 20 million dollars. Also the expansion would multiply the problems the company is facing, making the few relatively small issues a huge concern. Also the already low productivity of 75% of industry standards can be estimated to drop to 50% or even less, while the amount of waste would increase. To reduce the productivity issue, AN consulting suggest that is the expansion is truly the only option, the Cape Breton Wall coverings would hire more skilled and experienced workers from outside the area, transfer already skilled workers inside the company to more demanding positions and hire new workers only to entry level positions. Implementation plan Predictions of impact AN consulting group fully believes that if the Cape Breton Wall coverings implements the recommended changes the need for expansion is not needed at the time, and the company will be able to fix most of its issues during the second year of operating and will be able to match the industry standards in productivity, and skilled workforce and quality of products by the third operating year. If the expansion is implemented at this time with AN consulting recommendations and cautions, AV consulting group estimates that the productivity will drop to 65% of industry standards, and waste will increase, but the company will be able to meet the demand. However this will amplify the current issues and cause long term costs. ...read more.