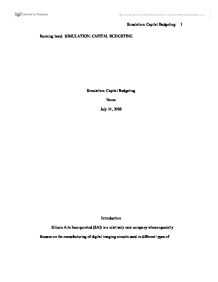 Running head: SIMULATION: CAPITAL BUDGETING Simulation: Capital Budgeting Name July 14, 2008 Introduction Silicon Arts Incorporated (SAI) is a relatively new company whose specialty focuses on the manufacturing of digital imaging circuits used in different types of electronics. It has a somewhat global presence, operating in North America, Europe and South East Asia. Although the company's annual sales turnover is $180 million, SAI has seen its revenues rise and fall with the industry's fluctuations. SAI enjoyed tremendous growth, 78% following their industry boom (Capital Budgeting, 2008). However, shortly thereafter, revenues decreased by 40% as a result of industry slowdown (Capital Budgeting, 2008). As a result, SAI reduced costs and withheld on capital expenses. In response to the dramatic change in the market and in efforts to remain competitive, SAI decided to further invest in the research and development of a specialized chip. The specialized chip used in data embedded mobile phones resulted from SAI's research and development efforts. Pilot tests of the chip showed positive results. With a gain in momentum in the industry, SAI has been able to record revenue growth in the last two quarters. The positive growth that SAI has been facing, the company has the opportunity to work with one of two companies that will potentially add to its value. As a result of the electronics industry and the investment decision made, SAI was well positioned going into 2002. ...read more.

The CEO of the company named Hal Eichner has his own propaganda such as increase the market share and merge with wireless communication market. The CEO should analyze and research the outcome of any changes within the organization before making any decisions. The authors of Merger and Acquisition mentioned that there are two bad reasons for mergers. First earnings growth is only accounting illusion (Jaffe, Ross, & Westerfield. pg. 8). Many companies in Wall Street nowadays are trap into profit shortfall in which stealing profits from the future that makes their present figure (cash) looks good in the eyes of investors or impress other ventures for the company to be sold. In reality, these public companies present their revenue as recognized in advanced even though the work is not completed. Stockbrokers will present the as a growing company, which attracts many investors will bid their stock and has a positive outcome to the entity but not to shareholders. SAI need to think through when they had that decreased of sales how would the CEO report the losses in stock market. SAI should make better decision and not follow the path of WorldCom and Enron. Second, a diversification shareholder who wants to diversify can accomplish this at much lower cost with one phone call to their broker than can management with takeover (Jaffe, Ross, & Westerfield. ...read more.

Credit Risk is one of the major problem in most business today, SAI needs to take initiative to collect a possible debt obligations of their debtors in due time. Operational risk is a threat of company's performance and their reputation is in the line. When acquiring a company the operational manager needs to have better and understanding of the new process so the result at the end would not be too costly. Pre-payment risk is when borrowers do not pay their portion. This would be too risky because the company can file bankruptcy of not collecting debt at all. In increasing profit share and merging to another company this involves several risks to SAI. The company may experience financial crisis, bad decision-making, and profit loss. The CEO should make a plan or build a committee group on how to handle and prevent each risks so whatever the outcome as an entity they have an alternative solution to any problem. For instance, to hire a knowledgeable investor to handle the company's portfolio, chose the right product, and provide procedures to streamline the process. Conclusion Silicon Arts Incorporated is positioned to become an even larger presence in the electronics industry. With careful evaluation and consideration, the organization can choose the right product to develop in order to reach their goals. Internal and external investment strategies must be carefully evaluated and analyzed potential investment risks. By carefully evaluating all strategies and risks, SAI is on the brink of success to carry them into the future. ...read more.