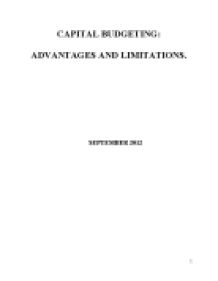 ﻿CAPITAL BUDGETING: ADVANTAGES AND LIMITATIONS. SEPTEMBER 2012 CHAPTER ONE INTRODUCTION 1.0 Background Study Capital budgeting is the process by which firms determine how to invest their capital. Included in this process are the decisions to invest in new projects, reassess the amount of capital already invested in existing projects, allocate and ration capital across divisions, and acquire other firms. In essence, the capital budgeting process defines the set and size of a firm?s real assets, which in turn generate the cash flows that ultimately determine its profitability, value and viability. In principle, a firm?s decision to invest in a new project should be made according to whether the project increases the wealth of the firm?s shareholders. For example, the Net Present Value (NPV) rule specifies an objective process by which firms can assess the value that new capital investments are expected to create. As Graham and Harvey (2001) document this rule has steadily gained in popularity since Dean (1951) formally introduced it, but its widespread use has not eliminated the human element in capital budgeting. Because the estimation of a project?s future cash flows and the rate at which they should be discounted is still a relatively subjective process, the behavioural traits of managers still affect this process. Capital budgeting is a process that is used to determine whether or not certain projects are worthwhile investments. Another term for capital budgeting is called an ?investment appraisal.? Every firm has both a limited amount of capital available and a desire to deploy that capital in the most effective way possible. When a firm is looking at, for example, acquisitions of other firms, development of new lines of business or major purchases of plants and equipment, capital budgeting is the method used to determine whether one option is better than another. Although conceptually capital budgeting is simple to understand, creating a capital budget has some definite challenges. ...read more.

The use of the payback method as the only or the major method seems to be more commonly used in small and medium-sized companies (Longmore 1989). Various studies of the use of the payback method in investment evaluation have been done at different points in time but some of the recent overviews of various studies are presented by Lefley (1996). Although the results from different studies at different points in time are not totally consistent, the payback method seems to be more frequently used in Europe than in the United States of America. Most importantly the overall conclusion seems to reveal that the payback method is much in use by firms for investment appraisals and it is therefore necessary to reduce some of its deficiencies. 2.3.1.2 Discounted Payback Period Method (Payback DCF) The payback method have gone through various development stages over the years, with the different variations aimed at eliminating some of its disadvantages and at the same time keeping the method as simple as possible. The payback method based on discounted cash flow figures was proposed by Rappaport (1965) which related the opportunity investment rate notion to the payback period measurement. This method attempted to overcome one of the drawbacks of the conventional payback calculation which failed to take into account a firm?s cost of capital. The discounted payback period method proposed by Rappaport is an improved measure of liquidity and project time risk over the conventional payback method and not a substitute for profitability measurement because it still ignores the returns after the payback period. He stated that, the proper role for the discounted payback period analysis is as a supplement to profitability measures and thus highlighting the supportive nature of the payback method, whether conventional or discounted payback period. Longmore (1989) also proposed a generalized time-adjusted payback rule which states that ?If the investment proposal?s payback, adjusted for the timing of the net cash flows, is less than or equal to the present value of annuity factor at the firm?s cost of capital for the life of the proposal, the investment should be accepted?. ...read more.

Firms try to avoid other appraisal methods like NPV, IRR and Real Options Approach because of the complexity that is built in them. It has also been found that, capital budgeting is an important aspect of a firm?s financial management. The importance of capital budgeting included, avoidance of forecast error, timely acquisition of assets. Capital budgeting can be a useful tool in the analysis of huge profits. However, there are serious limitations that must be considered when evaluating the results of these projects. These limitations can be used to manipulate the results of an otherwise unfavourable project and make it appear to have a larger return than it actually has. The study indicated one of the key limitations as its irreversibility. In other words, once a capital budgeting decision has been taken, it cannot be reversed. In view of this, crucial steps and analysis should be made before taking a capital budgeting decision. 4.3 Recommendations These recommendations were made based on the study. Firms should deal with uncertainty, a three-stage process: 1. Build knowledge through decision analysis. 2. Recognize and encourage options within projects. 3. Invest based on economic criteria that have realistic economic assumptions. Once the three-stage process (as outlined above) has been completed, capital projects should be evaluated using a mix of economic criteria that adhere to the principles of financial management. Three good economic criteria are Net Present Value, Modified Internal Rate of Return and Discounted Payback. Additionally, management of project risk should be different. Tools to manage risks include increasing the discount rate. Post analysis and tracking of projects should be implemented after the investment has been made. This helps eliminate bias and errors in the capital budgeting process. Firms should plan for funds far ahead of time. This makes capital budgeting decision by firms simpler when the time is due because the funds needed for the project are now available. Further studies and research by any individual or group are also recommended on topics relating to capital budgeting. This will broaden the horizon of capital budgeting and contribute substantially to economic growth and development. ...read more.