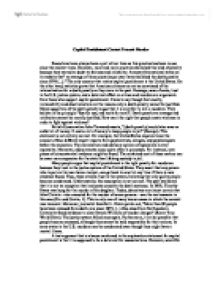 Capital Punishment Cannot Prevent Murder Executions have always been a part of our lives as this practice has been in use since the ancient times. However, more and more countries abolished this kind of penalty because they started to doubt its fairness and reliability. Amnesty International states on its website that" an average of three countries per year have abolished the death penalty since 1976 (...)." The only country that retains capital punishment is the United States. On the other hand, statistics prove that American citizens are not as convinced of the rationalization for a death penalty as they were in the past. Revenge, save of costs, trust in the U.S. justice system, and a deterrent effect on crimes and murders are arguments from those who support capital punishment. I have to say though that cruelty, irrevocability and discrimination are the reasons why a death penalty cannot be justified. Many supporters of the death penalty argue that it is only fair to kill a murderer. They believe in the principle "Eye for eye, and tooth for tooth". ...read more.

The justice system failed once again. Furthermore, it is also possible that people become executed, although they cannot be held responsible for their actions. In some states in the U.S. murderer can be condemned even though they might have a mental illness. A last argument that is always mentioned in the explanation statement for capital punishment is that it is supposed to be a deterrent for assassinations. However, scientific studies show that capital punishment does not deter murders, nor does the abolition of the death penalty cause an increase in crimes and murders. As stated from Amnesty International, "Research has failed to provide scientific proof that executions have a greater deterrent effect than life imprisonment and such proof is unlikely to be forthcoming. The evidence as a whole still gives no positive support to the deterrent hypothesis..." In 1983, a study examined 14 countries that had just abolished the death penalty. This analysis showed that murder rates had decreased more than 50 percent (Pro und Contra, 3). This statement emphasizes that a whole life in jail is rather a prevention of crimes than capital punishment. ...read more.

Suspects sometimes become convicted due to discriminating reasons. Data from Amnesty International show that the death penalty is used disproportionately often to punish the poor and minorities. In 1994, 42 percent of the accused workers in California were sentenced to death, whereas only 5 percent of the accused employers conceived capital punishment (Amnesty). One major problem is simply that rich people can afford better lawyers than the poor. Unfortunately, that emphasizes the deficiencies in the justice system, and it imposes the question, if we can even talk about justice here. Capital punishment is a very controversial topic. The supporters argue that it can only be regarded as fair to put a killer to death, whereas non-believers find it to be cruel and unjustifiable. The unequal treatment of those accused, and the uncertainty of whether a convict might be innocent or not should prohibit executions. It may sound frigid to argue against capital punishment right after the terrorist attacks. Maybe everyone believes that those who were involved deserve the death penalty. Maybe they do. Maybe they do not. This is a question that I do not feel able to answer. Everything I know is that the justice system cannot guarantee flawlessness and thus, there is no justification for capital punishment. ...read more.