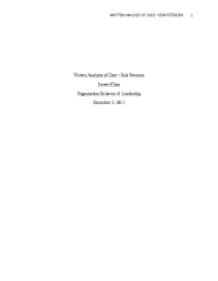 Case Analysis - A month behind its target, Green Mountain Cellular Telephone (GMCT) is facing delays in opening their operations for customers. Erik Peterson, the general manager of GMCT comes across several major problems

﻿WRITTEN ANALYSIS OF CASE ? ERIK PETERSON Written Analysis of Case ? Erik Peterson Sarwat Khan Organization Behavior & Leadership December 2, 2012 ________________ Written Analysis of Case ? Erik Peterson A month behind its target, Green Mountain Cellular Telephone (GMCT) is facing delays in opening their operations for customers. Erik Peterson, the general manager of GMCT comes across several major problems and looking for appropriate steps to be taken to address the key issues and to improve the organization to improve. Challenges Faced by Erik Peterson There are several challenges and hindrances faced by the general manager as he joins the organization in August. Having past experiences in radio communications and avionics equipment, Eric lacks any relevant experience in the cellular industry. With the goals and objectives to meet, Peterson is under the pressure of meeting the expectations of Jenkins, the founder of CelluComm who is very demanding and has the history of eliminating people from the board when they failed to meet his expectations. First, much to his surprise, he was assigned to report to Jeff Hardy instead of Jenkins. Hardy lacks any system operating experience and consequently; was unable to provide him with any advice or guidance which was crucial for Peterson being an amateur in the cellular industry himself. Related to this was the improper communication between CelluComm and GMCT as ?what to report, who to report? was never communicated to Peterson in a formal way. ...read more.

There are two cases where Peterson had given salary raise to subordinates which created chaos and had to cut off the salary later. It also affected the performance of the employees as it brought disappointment to those whose salary was cut off later and sense of deprivation among the rest. Inference: He should have consulted the headquarters in coordination with the HR department to allocate the right amount of salaries to avoid any chaos in the organization. 1. There were three new appointments in Peterson?s team. In addition to the problem with Melissa and Curt, some more individual problems emerged between Trevor and Curt, and Cantor and Green from LA; with Peterson. Inference: Although he has instigated many weekly meetings with everyone, with the tensions building up, he should have done more to relax the environment, for e.g. leisure activities or informal meet ups. Also there should be more informal meet ups between the headquarters CelluComm and the subsidiary GMCT. ________________ Key Problems Facing Erik Peterson From the previous analysis, we can derive key problems the organization is facing which obstruct its operations to be completed on time. We here analyze Peterson?s course of action and what he should have done in this situation: 1. Communication gap between CelluComm and GMCT, and within GMCT: There is lack of communication between the field workers with Curt and Erik and the information they receive is too delayed. ...read more.

For example by teaming up Curt and Stevana he could achieve more of technical and managerial skill set to be more productive. Moreover, Trevor could have been assigned to take care of utility. 5. Peterson should have defined clear roles and responsibilities, especially to Curt in the one-on-one counseling sessions that he needs to report directly to him whereas his subordinates reports to him. He could have developed a cross-functional organization chart to increase coordination between the employees. Action Plan for Meeting Finally, for his meeting with Chip Knight, the following action plan is suggested: 1. Open flow of information and communication should be developed between headquarters and GMCT. 2. Escalation process should be revised and a system should be developed for optimal communication between the field workers, contractors and GMCT to minimize the delay and to maximize the efficiency of inventory management. 3. A task-force should be developed to address critical issue during these two months until the launch of service operations. This should comprise of Stevana from Construction, James from Marketing, Melissa from Accounting, and Todd from Radio Engineering, and led by Peterson himself. There is a chance of conflicting interests of Todd with Curt, also Curt may question his absence from the task force. ________________ Reference Harvard Business School (1995). Erik Peterson (A). Erik Peterson Case - Hbr. Anti Essays. Retrieved December 1, 2012, from the World Wide Web: http://www.antiessays.com/free-essays/167394.html Erik Peterson Case (A) & (B). Scribd. Retrieved December 1, 2012, from the World Wide Web: http://www.scribd.com/doc/44973990/Erik-Peterson Erik Peterson Case. Scribd. Retrieved December 1, 2012, from the World Wide Web: http://www.scribd.com/doc/48817305/ERIK-PETERSON-CASE ...read more.