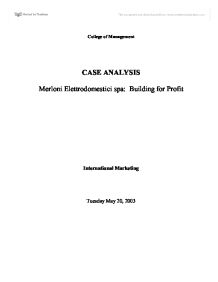 Indeed, the 1995 sales by volume figures tabulated on page 11 of the case show Indesit products accounting for 56% Merloni's volume of sales for that year, although it is noted that overall market share declined by 1%, from 5.8% in 1994 to 4.8% in 1995. This decline is attributed to the struggle being faced by traditional high street retailers and the closure of the electricity utility company stores, along with fierce competition from Zanussi and Hotpoint in the lower priced market segment, and the pulling of Indesit from Curry's stores, one of the Big Three appliance retailers. Merloni indicated that it has slated �20million for product development and productivity in 1995, which represents a significant 18% of the total sales revenue earned in 1994. As can be seen, the various international subsidiaries have faced very different business, marketing and competitive environments, and have responded to these in different ways. The international expansion approaches adopted, either from acquisition of existing companies, or from insertion of an existing product line into a market have resulted in different levels of performance being achieved. What must be noted is that "performance level" must be carefully defined, because while top management may consider a particular marketing strategy to have been highly successful by gaining an increase on overall market share by number of units sold, this may in fact have been at the expense of a reduction in market share by sales revenue either from price reductions, or a shift in product focus to selling more products at lower margin levels. 3. What is your assessment of the matrix that the consultants have provided for the company? Does it present the right solution? Why yes/why not? "The New Brand Multibrand Organization" that the Boston Consulting Group recommended handles the complexity of Merloni's multinational/multiproduct management structure quite comprehensively, leaving just a few logistical questions. It was created to effectively manage and coordinate countries and factories across their three brands: Indesit (a pan-European brand, able to take a dominant piece ...read more.

This may be due to the fact that they haven't yet overstepped their boundaries and acquired too many products/companies and taken on organizations that are beyond their expertise. The interesting aspect of this case is the fact that Merloni was growing (acquiring new products), and at the same time cutting back (consolidating factories and workforce), while making the appropriate changes to product line and positioning for the future. While Merloni has been successful, it is important to note that they did not achieve their current status without any challenges: they still face dilemmas in the United Kingdom and have yet to conquer the U.K. market - challenges still exist for even the most successful international expansion. For the U.K. case, it may have been beneficial to wait until they fully understood the market, and then entered quickly and confidently. The strategy an organization chooses to adopt when attempting to build capability for international expansion is clearly the most significant element in determining the success, or otherwise, of the organization's expansion plans. The decision to enter a country without first establishing business partners, or acquiring an existing operation, must be made extremely carefully, after considerable analyses of all the potential risks and downfalls involved. While this form of international expansion certainly has the highest levels of risk attached to it, it often also is the strategy that will reap the greatest returns for the organization, particularly where a gap in the existing international market can be identified and exploited. All in all, the main takeaways for building international expansion from the perspective of Merloni seem to be: stay within the realm of expertise, maintain the existing supply chain and retail relationships, trim the unnecessary workforce and integrate top management, have a clear depiction of where your products should fit in the marketplace and communicate that vision throughout the organization, and always focus the efforts to satisfy the end consumer. ...read more.