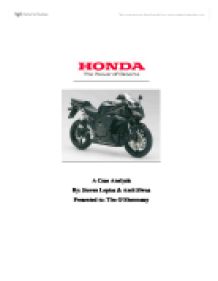 A Case Analysis By: Steven Leptos & Amit Siwas Presented to: Tim O'Shannassy Executive Summary This report is a strategic analysis of Honda Motor Co., Ltd. It looks at the international and domestic strategies employed by the organization. Informing this analysis was a series of journals, internet articles and of course the case itself. This report will provide a set of strategic recommendations for Honda Motor Co., Ltd which has undergone considerable difficulties in management and organizational strategies between the years of 1991 and 1997. The data researched and also found in the Case study has helped to identify the critical success factors of the company, areas in which the company must improve operations and finally helped to create our recommendations to Honda Motor Co., Ltd. A number of modern theoretical frameworks were used to identify environmental and industry issues, such frameworks include PEST, SWOT and 5 forces analysis. The companies operations will be explained in further detail in the proceeding section. Some of the weaknesses discovered in our research of Honda Motor Co., Ltd. are: * A major mismatch between production and sales in certain countries (eg: USA), this reduces their 'just in time' manufacturing capabilities. * Lack of supplier relationships. * A underdeveloped market in Europe. * Honda is falling behind in the auto market with the majority of their competition making strategic alliances with other major car manufacturers. Our Key recommendations to Honda are as follows: * A more rigid production Vs Sales strategy whereby countries with high levels of sales are also implemented with high levels of production. * Augment growth of the company in Europe, developing a better image through marketing and R&D. * Create a strategic alliance with a European car manufacturing company, giving Honda all the benefits of a strategic alliance plus the exposure they need in Europe. Supplier relationships should be developed. Table of contents Section Page Introduction 4 External Environment 5-7 Industry Analysis 8 Competitors 10 Critical Success Factors 11 Company Analysis 12 Product ...read more.

Page 4 figure 1.2 of the IMF Report also highlights the groupings in a pie graph, as demonstrated below. Figure 1.2: 1997 World Light Vehicles Production: 50.1 million units (IMF Auto Report 2000) Competitors Honda competitors are primarily in the Auto Manufacturing industry. Honda also competes in the Motorcycle & Other Small Engine Vehicle Manufacturing, and Lending sectors. Honda's competitive landscape includes: * Toyota * Nissan * Ford/Mazda * General Motors * Aprilia * Ducati * Kawasaki * Yamaha * Etc. Honda is apart of the 'Big Three' car manufacturers in Japan. The main competitors in 1997 for Honda are Toyota and Nissan being the other two companies who make up the 'Big Three' (IMF Auto Report 2000) Critical Success Factors 1. Early globalisation of its operations and sales. 2. The art of reconciling dichotomies between trade offs in most decisions. 3. An effective production strategy (explained further in SWOT), this includes aspects such as build in quality 'with' just in time manufacturing and rigid geographical manufacturing guidelines. 4. Valuable supplier relationships. 5. Patent protection, including protection of innovative ideas such as VTEC and even their own new engine designs such as Hybrid engines (half electric half petrol powered). 6. Expansion of distribution channels via R&D into what these new channels require. E.g. European market for Honda. 7. Strategic Alliances with major European players, in order to augment growth in Europe. 8. But the heart of its CSF's lies in the innovative process inherited by Honda in its engine designs, innovation and R&D. Company Analysis Honda is Japan's #3 automaker (after Toyota and Nissan) and the world's largest motorcycle producer. The company's car models include the Accord, CR-V, Civic, Element, and Ridgeline as well as gasoline-electric hybrid versions of the Civic and Accord. Honda's line of motorcycles includes everything from scooters to super bikes. The company also makes a line of ATVs and personal watercraft. ...read more.

Honda has the backing and reputation to be able to create a line of smaller, fuel efficient cars and implement these around Europe. Honda already has their 'foot in the door', however their reputation of being an over 60's car company in countries such as the UK must be countered by producing young fashionable 'smarter' cars; (in the last 4 years they have developed the Honda Jazz, which is exactly this) however when looking at the case from a 1997 perspective this is a highly profitable and marketable recommendation. If Honda is unwilling to change their image in the EU then a second option is available in this recommendation. Honda has the option to exploit the image of being an older persons car and extensively market their product to just that. Once it grows market share, then a further differentiation strategy could be utilised to diminish negative, stereotypical images. This is less favorable however could be seen as a lower risk strategy. CSF: Distribution Channel 3rd Recommendation Strategic alliance: The 3rd recommendation is in fact linked to the 2nd. If Honda is able to create a strategic alliance with a car company that produces and sells cars in the EU then they will be able to expand their existing 3.3% of sales extensively. A strategic alliance will also allow them access to technologies and processes they do not currently possess and also if chosen wisely they will gain extra cash flow form the strategically aligned company. The only disadvantage within this recommendation is that Honda's own technologies and plans would also be exposed. CSF: Strategic Alliances 4th Recommendation Supplier Relationships: Honda is the only Japanese Auto-Mobile manufacturer who has not yet organized a 'suppliers association' as a forum for suppliers to meet and solve common problems and develop important relationships with them. We recommend that Honda set up such a forum in order to develop healthy relationships which will allow them to negotiate better prices, develop new products with greater ease and solve problems with the suppliers technical help. CSF: Valuable supplier relationships. ...read more.