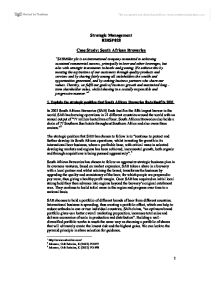 Strategic Management 02BSP028 Case Study: South African Breweries "SABMiller plc is an international company committed to achieving sustained commercial success, principally in beer and other beverages, but also with strategic investments in hotels and gaming. We achieve this by meeting the aspirations of our customers through quality products and services and by sharing fairly among all stakeholders the wealth and opportunities generated, and by seeking business partners who share our values. Thereby, we fulfil our goals of business growth and maximised long-term shareholder value, while behaving in a socially responsible and progressive manner."1 1. Explain the strategic position that South African Breweries finds itself in 2001 In 2001 South African Breweries (SAB) finds itself as the fifth largest brewer in the world. SAB has brewing operations in 21 different countries around the world with an annual output of "77 million hectolitres of beer. South African Breweries also holds a chain of 77 Southern Sun hotels throughout Southern Africa and also owns three casinos."2 The strategic position that SAB has chosen to follow is to "continue to protect and further develop its South African operations, whilst investing for growth in its international beer business, where a profitable base, with critical mass in selected developing markets and regions has been achieved, incremental growth, both organic and through acquisitions is being pursued aggressively".3 South African Breweries has chosen to follow an aggressive strategic business plan in its overseas ventures, based on market expansion. SAB takes a share in a brewery with a local partner and whilst retaining the brand, transforms the business by upgrading the quality and consistency of the beer, for which people are prepared to pay more, thus giving a healthy profit margin. Once SAB has acquired an initial local strong hold they then advance into regions beyond the brewery's original catchment area. They continue to build initial mass in the region and progress over time to a national basis. SAB chooses to hold a portfolio of different brands of beer from different countries. ...read more.

1. The entity's actual performance for the most recent accounting period and how this compares with its previous plan for that period. 2. Management's explanations of any significant variances between the two. 3. Management's financial plan for the current and forward accounting periods and explanations of the major assumptions used in preparing it.14 2. What strategic options are open to South African Breweries? There are five strategies that are open to South African Breweries: Price Based Strategy Route 1 - 'no frills strategy' This strategy combines a low price, low perceived added value and a focus on a price-sensitive market segment. This strategy may seem unattractive but in some segments of a market this may be a viable option where customers do not perceive any value in paying more for certain products. A business may also choose this strategy as an entry route into the market and then changing to another strategy once established, or when competing in a market where the majority of businesses are following the same different strategy. Route 2 - 'low priced strategy' This strategy tries to achieve a low price whilst still maintaining the value created by their competitors. This is difficult as it may result in a margin reduction across an entire industry. Examples of successful strategists to this method are supermarkets who have many 'low cost leaders' or 'value brands' which are in-fact not much below in quality then the average brand but the supermarket is able to sustain the low cost with simple packaging and by making a profit on other products. Route 3 - 'differentiation strategy' Aims to provide services, which are vastly different to competitors in terms of value and dimension. Examples would be centres of excellence that receive greater funding from the Government or Universities, which are constantly competing to be the best. If a company chooses this strategy they have to be aware that to be the best will be costly. ...read more.

instead of seeking pleasure for the short term they would rather spend their money on cars, doing up their homes, holidays, education etc... * SAB targets each of their market's individually which is fair enough as each country will respond differently to a marketing strategy, however SAB should hold one central office either in South Africa or in London from which the company can be reached and from which all their marketing plans stem from. As a result the company will be more focused. OPPORTUNITIES * Further recognition in Continental Europe and the United Kingdom due to listing on the London Stock Exchange. * Increased profits in Central America in future years once the business becomes established. * Further saturation of Alco pops and soft drinks. * Possibility to introduce further Southern Sun hotels and gamming facilities worldwide. * Increasing market share in Poland due to rising numbers of beer drinkers in the younger market. THREATS * Big brands are set to become bigger, Stella Artois, Carling, Foster's and Budweiser. * Ageing population means less beer drinkers. * Price competition from substitute supermarket brands and promotional discounts * Internet - Companies going on line. Wine Merchants - Lastorders.com offering 20% less then high street stores. Tescos, Sainsburys, Iceland, First Quench and oddbins all went on line in 1999. South African Breweries should choose to follow the 'hybrid strategy'. The success of this strategy will be evident when the company is able to "deliver enhanced value in terms of customer needs, whilst also having a cost base that permits low prices and is sufficient for reinvestment to maintain and develop bases of differentiation".18 SAB is already a worldwide organisation with a growing presence. This strategy would work well for the company if they are able to achieve much greater volumes then the competition, the low selling prices will be offset. The hybrid strategy also works very well with entry into new markets. As SAB has a strong history of foreign acquisitions this will help them ultimately "take share, divert the attention of the competitor, and establish a foothold from which they could move forward". ...read more.