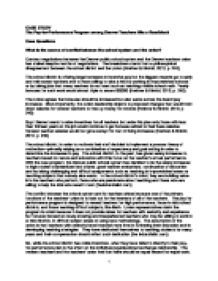 CASE STUDY The Pay-for-Performance Program among Denver Teachers Hits a Roadblock Case Questions What is the source of conflict between the school system and the union? Contract negotiations between the Denver public school system and the Denver teachers union has stalled despite months of negotiations. The breakdown stems from a philosophical disagreement between the school district and the Union (Kreitner & Kinicki, 2010, p. 240). The school district is offering large increases in incentive pay but the biggest rewards go to early and mid-career teachers and to those willing to take a risk by working in impoverished schools or by taking jobs that many teachers do not want such as teaching middle school math. Yearly bonuses for such work would almost triple to around $3000 (Kreitner & Kinicki, 2010, p. 240). The Union agrees that bonuses should be increased but also wants across the board pay increases. More importantly, the Union leadership objects to proposed changes that would hold down salaries for veteran teachers to free up money for novices (Kreitner & Kinicki, 2010, p. 240). Supt. Bennet wants to raise incentives for all teachers but under his plan only those with less than thirteen years on the job would continue to get bonuses added to their base salaries. Veteran teacher salaries would not grow except for cost of living increases (Kreitner & Kinicki, 2010, p. ...read more.

According to Kreitner & Kinicki, procedural justice is defined as the perceived fairness of the process and procedures used to make allocation decisions (p.221). The Denver public school system believed that the performance bonuses would motivate teachers to work harder to achieve the desired results (higher student test scores, good evaluations, continuing education or taking difficult assignments). The school district also thought that each teacher's valence would be the same. Valences are the positive or negative values people place on outcomes. Perhaps the school district felt that a bonus is a bonus and it doesn't matter if the bonus is tied to the base pay or comes as a bonus check. What the school district failed to realize, however, is that the younger teachers that fall within the 13 year window would view the valence as positive and this new pay-for-performance structure would have a positive inequity for the young teachers. For the veteran teachers the valence is negative and to them the new pay-for-performance structure has a negative inequity. To the veterans, the less accomplished teachers are getting higher rewards that result in an unequal pay structure. This feeling of inequity of lack of justice on the part of the veteran teachers is a demotivating factor. This demonstrates the Equity Theory (theindustrialist.com). What role does organizational culture play in this case? An organization's culture comprises an interlocking set of goals, roles, processes, values, communications, practices, attitudes and assumptions. ...read more.

Understanding this theory can help the school system negotiate a contract settlement that will in part attract to those teachers who have a need for achievement or power (Kreitner & Kinicki, 2010, p. 216). As explained in an earlier question, the Equity Theory is a model of motivation that explains how people strive for fairness and justice in social situations or give and take relationships. Equity Theory explains how an individual's motivation to behave in a certain way is fueled by feelings of inequity or a lack of justice. On the job, feelings of inequity revolve around a person's evaluation of whether he or she receives adequate rewards to compensate for his or her contributive inputs. Inputs are those things such as one's education, training, skills, creativity, seniority, age, personality traits, effort, experience, or personal appearance (Kreitner & Kinicki, 2010, p. 218). In negotiating a fair contract, the school systems should understand that the many teachers, especially the veteran teachers may be motivated based on equity and would feel that a contract solely based on performance or achievement isn't fair or equitable. Understanding Expectancy theory is also very important in negotiating a contract for the Denver teachers. Expectancy theory holds that people are motivated to behave in ways that produce desired combinations of expected outcomes. Expectancy is a belief that effort leads to a specific level of performance. Instrumentality represents a person's belief that a particular person's outcome is contingent on accomplishing a specific level of performance. Valance refers to the positive or negative value people place on outcomes. ...read more.