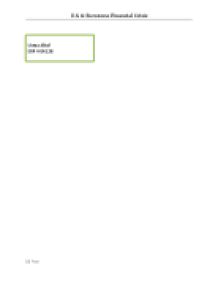 Causes and Effects of the Global Financial Crisis

﻿U.S. & Eurozone Financial Crisis ________________ Uzma Altaf ERP # 04128 ________________ Table of Contents Causes contributing to the development of financial crisis in the US & the Eurozone Greed! The Housing Bubble in the U.S. & Eurozone NINJA Loans & Speculative Purchases Chinese mercantilism And Then the Bubble Burst! Role of Credit Rating Agencies Role of Regulators Net Capital Rule Relaxed No Regulation of Shadow Banking System Allowance to meddle with accounting rules Self-regulation of derivatives Removal of the Glass Steagall Act Corporate risk-taking and leverage Different names, one purpose (of investment portfolios) Mark-to-Market Accounting Challenges facing economic managers of US and Eurozone today The Federal Budget Deficit Lengthy Recession Risk of a country exiting EU Stimulus Programs The Housing Market Remains a Challenge Dodd Frank Act Position of the banking system in the U.S. Limited ability of Germany in EU?s bailout plan Austerity or no austerity Pressure on fulfilling promises on Hollande Effect of people?s perception of Mario Draghi Domino effect Bibliography Causes contributing to the development of financial crisis in the US & the Eurozone Greed! The Federal Reserve under the leadership of Alan Greenspan lowered interest rates from 6.5% to 1.0% between January 3 2001 and June 25 2003. People believed that it was done to prevent a recession but it was actually done to make access of money easier for people. If people would borrow more, they?d buy more and consume more. In addition to this, financial sector underwent unethical practices and advertised the ?American Dream? of every citizen owning a house. The Financial Crisis didn?t just happen unknowingly, it was the result of a few people selfishly hoarding on money no matter what was at risk. I partially agree with Nobel laureate and liberal political columnist Paul Krugman who said that politicians and government officials should have realized that they were re-creating the kind of financial vulnerability that made the Great Depression possible?and they should have responded by extending regulations and the financial safety net to cover these new institutions. ...read more.

gross domestic product in 1997 to 113.8% in 2007. This increased the vulnerability of investment banks to a financial shock. Five top institutions reported over $4.1 trillion in debt for fiscal year 2007, about 30% of USA nominal GDP for 2007. Lehman Brothers was liquidated, Bear Stearns and Merrill Lynch were sold at fire-sale prices, and Goldman Sachs and Morgan Stanley became commercial banks, subjecting themselves to more stringent regulation. Fannie Mae and Freddie Mac, owned or guaranteed nearly $5 trillion in mortgage obligations at the time they were placed into conservatorship by the U.S. government in September 2008. Different names, one purpose (of investment portfolios) One such investment portfolio was adjustable-rate mortgage; the bundling of subprime mortgages into mortgage-backed securities or collateralized debt obligations for sale to investors, a type of securitization; and a form of credit insurance called credit default swaps. The CDO in particular enabled financial institutions to obtain investor funds to finance subprime and other lending, extending or increasing the housing bubble and generating large fees. Approximately $1.6 trillion in CDO's were originated between 2003 and 2007. The pricing model for CDOs clearly did not reflect the level of risk they introduced into the system. Another example relates to AIG, which insured obligations of various financial institutions through the usage of credit default swaps. The basic CDS transaction involved AIG receiving a premium in exchange for a promise to pay money to party A in the event party B defaulted. However, AIG did not have the financial strength to support its many CDS commitments. This is analogous to allowing many persons to buy insurance on the same house. Speculators that bought CDS insurance were betting that significant defaults would occur, while the sellers (such as AIG) bet they would not. Mark-to-Market Accounting Accounting rules require companies to adjust the value of such securities to market value, as opposed to the original price paid. ...read more.

Some may have packed their bags for Belgium, but the tax isn?t as scary to the rich as it might appear. Very few people make 1 million euros in salary. On balance, this and other taxes on banks and businesses are expected to bring the government more money (about 7 billion euros a year) than they will scare away. Effect of people?s perception of Mario Draghi Since most countries left the gold standard over the last century, a currency?s value is based entirely on collective faith. With the dollar or the pound, people?s faith is rooted in centuries of good judgment by central bankers. But the euro is so young and under so much stress that, in many ways, its value is determined every day by what people think about the man in charge, Mario Draghi, president of the European Central Bank. Draghi could theoretically solve everything in an instant. The E.C.B. could buy up all the sovereign debt of Europe?s struggling countries, or at least enough of it to stop the world from panicking. That would allow each country to lend to its own troubled banks. Germany, fearing inflation, is telling him not to. But many economists are telling Draghi to do just that and more and to do it quickly. Domino effect About 20 percent of U.S. foreign trade is with the E.U. That?s significant, but if the European economy collapses, it?s quite likely that China, India, Brazil and several Gulf States will pick up much of the slack. And a truly collapsed euro would mean discounts on everything from French wine to Italian shoes to Greek yogurt. More worrying is if a) the euro zone faces an abrupt financial panic, and b) it turns out that many American banks are overly invested in those suddenly defunct European banks. There is a general assumption that U.S. banks are prepared for the worst. But many in the financial world thought they were prepared for the collapse of Lehman Brothers too. ...read more.