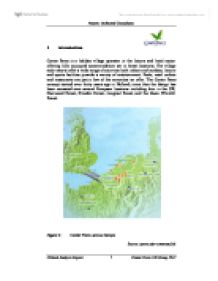 1 Introduction Center Parcs is a holiday village operator in the leisure and hotel sector offering fully equipped accommodation set in forest locations. The village style resorts offer a wide range of activities both indoor and outdoor; leisure and sports facilities provide a variety of entertainment. Pools, retail outlets and restaurants are just a few of the amenities on offer. The Center Parcs concept started over thirty years ago in Holland, since then the design has been recreated over several European locations including four in the UK, Sherwood Forest, Elveden Forest, Longleat Forest and the Oasis Whinfell Forest. Figure 1: Center Parcs across Europe Source: cparcs.star-command.de 1.1 History and Formation The founder of the CP concept Piet Derksen sold the majority of his shares in 1989, to Scottish and Newcastle in order for him to concentrate on the development of the parks themselves. S & N took complete ownership of CP in 1991 to expand their leisure market, in addition to this S & N owned the holiday camp Pontins. Later in 2001 S & N sold Pontins along with Center Parcs, this move was to concentrate on brewing. In addition to the sale of the holiday villages, S & N also sold their public houses. In the meantime CP continued to expand across Europe; these sites can be seen in Figure 1. ...read more.

This can incur high operating costs for the company, wage bill, training etc are a costly resource. Moreover this may be the reason that Center Parcs is so successful, with this high proportion of staff, Customer Service could prove to be implemented easily, and thus providing improved service quality. This could be the basis for CP strong brand awareness and reputation. 2.3 Ownership and Control Today the major shareholders of Center Parcs (UK) Group PLC as of November 2004 are as follows: F & C Management 14.12% Threadneedle Investment Managers 5.30% Other Directors 1.69% Figure 4 Major Shareholders Source: Center Parcs (online 2004) F & C Management and Threadneedle Investment Managers have a more than 3% share, which provides them with an underlying function/voice within the company. This could prove to be a problem for Center Parcs as shareholders general interests are usually profit driven and this may interfere with any of the processes that general management may wish to implement. 3 Performance Indicators 3.1 Center Parcs Own Targets Figure 5 Occupancy Targets Figure 5b Occupancy from 1997 Source: Center Parcs (online 2004) Figure 5c Increase in Repeat Bookings Figure 5d Increase in On-site Spend Figure 5e Customer feedback Figure 5f Expansion target 3.2 Market Segmentation: The growth in the ABC1s market indicates growth for Center Parcs who target higher socio-economic groups as the customer base. ...read more.

Source: Center Parcs websites Although Figure 8 is slightly dated it shows a strong turnover figure for the company compared to its European rival. Center Parcs Europe has a larger capacity yet turnover is approximately double that of CP UK. This implies that occupancy and visitor spending is greater in CP UK compared to CP Europe. Porter also suggests that there are three strategies to overcome these forces - Center Parcs process of response is as follows in Figure 8a: Figure 8a: Response process for competitive position This process places CP in a strong unique position in the market, a strategy which provides the Group with a competitive advantage. To follow this, CP may be more attractive than their UK competitors due to their strong environmental management, for which they have received recognition awards and strong sustainable reputation. 5. Closing Statement: To sum up earlier analysis the consultancy recognises the company is choosing to grow organically thus providing low-risk development, this could maintain a viable long-term future for the company if development occurs as planned and forecast. The company has established much strength for itself as recognised in the SWOT analysis note Appendix D. Once the fifth site is in operation, there will be more capacity to improve on targets such as turnover, repeat bookings etc. With no direct competitors and five sites this will provide the Group with a whole market segment, this will further strengthen CP position and benefit share value. ...read more.