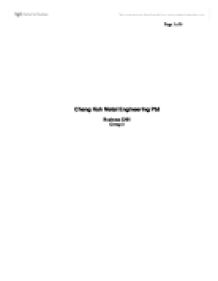 Chang Koh Metal Engineering Ptd Business 2301 Group 3 Chang Koh Metal Engineering Ptd. is a company founded in 1982 by a first generation Chinese gentleman named Teo Kai San. Recently the company has expanded its operations by opening a production plant in Puitan, China. Teo Kai San has decided to put his son Andrew in the position of general manager. Andrew has formal education, receiving his degree from the National University of Singapore. He also has experience in positions of authority and responsibility after working for a large American multinational. In order to help integrate not only Andrew into an unfamiliar culture but the company in general, Keo Tai San has chosen to employ a relative from the Puitan region, Jian Wei, to assist both Andrew and the company settle into their new home. Recently the company has been experiencing numerous problems that have led Andrew to believe that moving to China may have been a mistake. The problems that the company has been experiencing are of variant nature and have no easy solution. Productivity is not what it should be both in quantity and quality. There have been clashes of opinion between management, in particular between Andrew and Jian Wei. ...read more.

It seems that there is a great deal of nepotism running through the company not only with the hiring of family for management positions but also for positions on the factory floor, "Jian Wei would contact city officials and friends and relatives and ask them for recommendations on who to hire", this is a terrible way to go about hiring. What experience do the concerned individuals have with this type of work and will they have the company's best interest's at heart? Andrew did not agree with Jian's hiring policies and this has caused tension between the two. Jian has opposed Andrew on major decisions and it is apparent that Jian believes that the company is there to provide for the workers as oppose to a mutual relationship where both benefit. The best examples of this are the stance that Jian has taken on the firing of an employee that is in clear violation of work rules, the using of a machine designated for maintenance. On this issue he not only disagreed with the disciplinary action that Andrew took but balked at the idea that the employee may be fired. ...read more.

But as previously mentioned, this is not the proper thing to do in China, however it is ridiculous to suggest that every Chinese company condones poor performance and violation of their individual rules and regulations. In order to combat the problem that Andrew faces with the pay system, we would suggest a mixture of all three systems. We feel it is necessary to have a decent level of basic pay, however it is also beneficial to have a reward system. Thus if the bonus levels were set higher under the strict rule that quality must be the primary focus the bonus system could be a major incentive for the production operators. In order to insure that quality is maintained the demerit system must be introduced into the pay structure of the quality group, with them being fully aware that any percentage of faulty parts passed over that deemed normal will result in a loss of money. Andrew's anticipation that his previous work experience would lead to immediate success in the new plant is analogous to many corporations expanding into foreign territory. The distinct cultures in each region present an unforeseen hurdle to managers trying to succeed in a new country or region. These organizations are being forced to adjust their business practices in order to succeed. Page 1 of 1 ...read more.