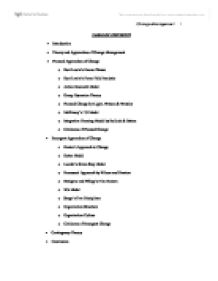 TABLE OF CONTENTS * Introduction * Theory and Approaches of Change Management * Planned Approaches of Change o Kurt Lewin's Freeze Phases o Kurt Lewin's Force Field Analysis o Action Research Model o Group Dynamics Theory o Planned Change by Lippit, Watson & Westley o McKinsey's 7-S Model o Integrative Planning Model by Bullock & Batten o Criticisms of Planned Change * Emergent Approaches of Change * Kanter's Approach to Change o Kotter Model o Luecke's Seven Step Model o Processual Approach by Wilson and Dawton o Pettigrew and Whipp's Five Factors o 3Cs Model o Senge's Five Disciplines o Organization Structure o Organization Culture o Criticisms of Emergent Change * Contingency Theory * Conclusion INTRODUCTION Before change management can be described, it is important to understand what is meant by the word 'change.' Although there is no universal definition change, it has been explained in terms of guises, transformation, metamorphosis, evolution, regeneration and transition (Hughes, 2006). The generic definition of change as defined by Hughes (2006) is "any alteration in the status quo". Changes in organization take place for many reasons. It is sometimes done in order to have new ways of doing work or organizing work. It is sometimes done to change the processes in which people are utilized. Noteworthy changes in the organization occur such as when the organization wishes to change its strategy on the whole for success, the organization wants to change the nature of its operations. Changes in organization also occur as the organization evolves in the course of various life cycles. In order to manage the changes occurring in the organization, it is referred to as the change management. A definition given by Hughes (2006) in his book Change Management defines it is "The leadership and direction of the process of organizational transformation - especially with regard to human aspects and overcoming resistance to change" (Hughes, 2006). ...read more.

Therefore the organizational change that is taking place is leaning towards continuous state and open-ended process in contrast to self-contained and discrete events (Burnes, 1996; Bamford & Forrester, 2003). o The planned approaches to change focus on the small scale change and incremental change. This focus of the planned change according to Bamford & Forrester (2003) does not make it applicable to situations that require radical change as well as rapid transformational change. o Another criticism of the planned change approaches reflects the scope of the change model. In this respect, the planned change model can apply to situations where directive approaches are required and thus restricts the scope for involvement (Bamford & Forrester, 2003). o According to Burnes (1996), planned change models are criticized on the basis that they are able to reach a common solution depicting that all the members involved in the change process are willing to implement the change and thus ignores the conflicts and politics that arise in change implementation. o Another criticism done by different writers is that the planned change models are seen to support top-down approach or management driven approach to change. By doing so, it ignores the circumstances and situations in which bottom-up approach might be needed (Bamford & Forrester, 2003). Burnes (2004) in his journal article 'Kurt Lewin and the Planned Approach to Change: A Re-appraisal' has mentioned the views of writers such as Buchanan and Storey as ". . . their attempt to impose an order and a linear sequence to processes that are in reality messy and untidy, and which unfold in an iterative fashion with much backtracking and omission." Burnes (1996) quotes the example of Dawson and Wilson. Both these writers confront the planned change models as not been appropriate in an organization that is becoming rapidly dynamic and uncertain. Wilson argues that planned model attempts to give timetables, objectives and methods that rely on the role played by the managers who bring about change. ...read more.

CONCLUSION The pluralist approach states that "There can be never a universal theory of organizational change as change involves a movement to some future state that comprises a context and time that remain unknown." (Hughes, 2006) Keeping the above quote in view, it can be said that the planned and emergent approaches to change should not be viewed as 'clash of the titans' or as the opposing approaches of change ideas (Armanekis & Bedeian, 1999). Both these approaches to change can be viewed as situational approaches. This means that both the approaches tend to address different contingencies or variables in a particular situation (Blokdijk, 2008). The models and methods in the planned approaches to change can be applied to situations and organizations that are stable and predictable and therefore change can occur from top down management (Burnes, 1996). On the other hand, emergent approaches to change can be best suited to those organizations where the situations are unpredictable and fast-moving and change can occur from bottom to up. Purser (2004) argues that before implementing the planned and emergent approaches, they have to be evaluated on the basis of their appropriateness in a particular organization keeping its culture in view. Burnes (1996) also says that to judge an approach as good or bad is misleading. The approaches should be thought in terms of appropriateness regards to the situation and circumstances. Keeping the above argument in view, it becomes highly important for the managers to choose and adopt those approaches that best suit their particular circumstance as there are a wide range of change approaches to choose from. At one point, it might involve choosing those approaches that move the organizations away from the preferred mode of managing the change. Many writers such as Burnes (1996), Purser (2006) and Blokdijk (2008) have warned that it is not about which approaches and best practices are chosen by the manager. The main thing that should be kept in view by the managers is that what is to be changed, what is the circumstance and what is the choice of adopted approach. ...read more.