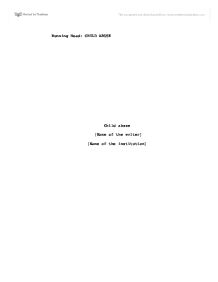 [Name of the writer]

[Name of the institution]

The definition of child abuse comprises four types of abuse and neglect: physical abuse, sexual abuse, neglect, and emotional/psychological abuse. Despite the delineation of these four categories, there is little consensus about how to define abuse. This lack of universal definition makes it difficult to assess the prevalence of child abuse and point to its existence. Moreover, as a result of cultural differences in child care and socialization, certain behaviors may be identified as abusive in one cultural context but not in others.

These four forms of child abuse are difficult to define because parenting and disciplinary practices vary across cultures. For example, the practice of separating the infant from his or her parents by putting the child in a separate room or in a crib after birth is common for many parents in the United States. In contrast, this practice is seen as neglectful and hurtful among others who view the infant as totally dependent on the parents after birth. Thus, it is the parent's responsibility to be close to the infant in order to identify and respond to the infant's ongoing needs. Hence, in these cultures, the infant may stay in the same room as the parents or sleep in the same bed.

An Asian custom called cao gio involves rubbing a small, warm coin on the child's body. This practice is considered a common folk remedy for fever, but it may be seen as abusive by other cultures. Another example concerns the use of caretakers to watch young children. In some cultures, for example, the use of a full-time nanny or babysitter is considered neglectful because the child is deprived of seeing his or her parents and having the consistency of parental care. Yet in other cultures, the use of hired caretakers is a common practice. Similarly, although some cultures value extended family members who take on child-rearing and caretaker roles, other cultures view parents who engage in this practice as not fulfilling their parental responsibilities. These examples and the differing child care practices they illustrate highlight the complexity associated with any attempt to define child abuse in a cultural context.

Any discussion of the prevalence of the four forms of child abuse must begin with the caveat that all types of child abuse are greatly underreported and underestimated. It is difficult to accurately state the prevalence of the four types of abuse in the United States because of problems with the identification of abuse, the underreporting of abuse, and as mentioned earlier, the lack of an agreed-upon definition of abuse. Some studies provide a glimpse into the prevalence of underreporting. One report found that one state's vital records had underreported child deaths from abuse by almost 60%. In a study of hospital emergency rooms, it was found that child abuse had occurred in 10% of all blunt trauma patients under five years of age.

The underreporting of abuse is related to several factors. It is known that victims of child abuse often do not report the abuse. Children who are five years of age or older may know and care for the abuser, and therefore they find themselves trapped between the need for affection and loyalty and the sense that the abuse is wrong. In the case of sexual abuse by a family member, loyalty and affection conflicts with the child's sense that the sexual activities initiated by the perpetrator are wrong. If a child tries to tell the truth and break away, he or she may be threatened with a loss of love or even violence. The child may be seen as a liar and a troublemaker and thus alienated by the family. Such responses only intensify the child's sense of self-blame and feelings of worthlessness.

Other literature states that, in addition to the victim's tendency to be silent about the abuse, observable behavioral indicators may not be noticed or reported by mandatory reporters. Mandatory reporters are professionals and institutions that all states require to report suspected abuse. Mandatory reporters include health care providers, mental health care providers, social workers, educators, school personnel, law enforcement professionals, and day care providers. Eighteen states require that any person who suspects child abuse must report it. Many states also require those who develop film to report suspected abuse. The literature indicates that failure to report abuse occurs because mandatory reporting laws are not enforced and because people do not think reporting the abuse will be helpful.

The National Child Abuse and Neglect Reporting System (NCANDS) is a federally funded annual collection of data on child abuse and neglect from state Child Protective Services (CPS) agencies across the country. The NCANDS data include cases in which children were investigated for probable child abuse, and the investigation determined that child abuse did occur. The NCANDS figures for 2000 identified 862,000 victims. Of those, 50.6% were Caucasian, 24.7% African American, 14.2% Latino, 1.6% Native American, and 1.4% Asian American/Pacific Islander. The 1999 figures found that 828,000 children had experienced abuse or neglect. This means that 11.8 out of every 1,000 children suffered from abuse or neglect. The figures showed that 1,100 children died from maltreatment and 2.1% died while they were in foster care. In terms of the prevalence of the different types of abuse, 58.4% of the cases involved neglect, 21.3% physical abuse, and 11.3% sexual abuse. In terms of gender, both males and females reported physical abuse and neglect at the same rate. However, females were more likely to experience sexual abuse than males: 1.6 for every 1,000 females in comparison with 0.4 for every 1,000 males. Younger children, those under the age of three, were most likely to be abused and neglected.

The National Incidence Study of Child Abuse and Neglect (NIS-3) is another national data set on incidences of child abuse. The NIS-3 found that 1,553,800 children in the United States were abused or neglected in 1993. The Children's Defense Fund has found that African American children are three times more likely to die from child abuse. Although the NIS-3 does not report on racial and ethnic differences, other research suggests that there may be racial and ethnic differences in the prevalence of abuse and neglect.

Parents and caregivers most in need of treatment because they are perpetrating child abuse are actually the least likely to seek it. Child abusers may feel shame and guilt and fear losing their children. Abusers who are non–family members fear criminal repercussions. Most often, treatment only comes as the result of legal mandate once the abuse is discovered.

In the area of prevention of child abuse, prevention can occur at the cultural level. Cultural violence, as evidenced by strong violence in the media, has been linked as a promoter of violence within families. On a cultural level as well, the link between poverty and child abuse has been established. Thus, efforts to reduce cultural violence and poverty are theorized to have a direct impact on the welfare of children.

Prevention and education services aimed directly at future parents have a strong impact as well. Prenatal medical care protects the health of the new mother and allows her to be in a better state to care for a baby. Prenatal programs, family-centered birthing and coaching classes, infant care classes, and parenting classes do everything possible to educate and prepare parents for the demands of caring for a baby, with the goal also of facilitating emotional bonding between the infant and the family. Careful attention by the medical profession and the members of a new mother’s support system is recommended, so that postpartum psychological symptoms and disorders can be treated, preventing neglect and maltreatment of the infant, and alleviating the mother’s intense suffering caused by these often unrecognized and untreated disorders.

Support groups, parenting education, and community programs can also assist in relieving parental stress. Food banks, shelters, thrift stores, and emergency assistance programs can provide some help to parents. Some communities even offer respite child care services where parents who are on the verge of abusive actions can leave their children temporarily. Schools provide safety education to children (programs on topics such as stranger danger) and teach children what to do if they are being abused. The National Child Abuse Hotline at 1-800-422-4453 is available for all members of the community.

Despite increased preventative and intervention services and strong public awareness and concern about child abuse, this problem is far from going away. Only through continued education of parents and changes at all levels of society can the problem of child abuse be prevented and eliminated.