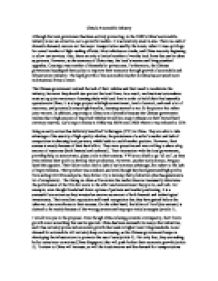 China's Automobile Industry. The rapid growth of the automobile market in China has attracted more multinational firms to enter.

China's Automobile Industry Although the local government has been actively promoting, in the 1980's China's automobile industry is not an attractive, nor a powerful market. It was relatively small in size. There is a lack of domestic demand, cars are not the major transportation used by the locals, rather it was a privilege for a small number of high-ranking officials. Most vehicles are trucks, and China was only beginning to allow taxi services. Also, there are only a limited number of worthy local firms that can be taken as partners. However, as the economy of China rises, the local's income and living standard upgrades. Creating a vast number of demands for private cars. Furthermore, the Chinese government has shaped their policy to improve their economy through growth of automobile and infrastructure industry. ...read more.

in China. They are able to take advantage of the scarcity of high-quality vehicles, the persistence of a seller's market and lack of competition in choosing local partners, which leads to a solid market position. However, their success is mostly because of their hard effort. They were proactive and were willing to share a big amount of resources (both financial and technical). Their interaction with the local government, providing help to some extent, plays a role in their success. VW is not afraid to go 'all out', as they even reinvest their profit to develop their production. However, another early entrant, Peugeot faced the opposite. Their failure is not due to lack of early entrant advantage, but rather to the lack of improvements. Their product was outdated, and even though they have generated high profits from selling CKD kits and parts, they did not try to develop their production (that has generated a lot of complaints). ...read more.

China has been successful in many other industries, and it has certainly promoted economic growth that leads to higher local living standards. Local demand for automobile will certainly keep on increasing, as the Chinese government keeps on developing the infrastructure to promote the use of cars (article 2). Not only that, they are making bullet trains inter-countries (China-Singapore) that will push further their economic growth (article 3). Tourism to China will increase, so will the locals income and the demand for transportations (including trains and boats). By being able to capture those potential demands, the benefits of this project will certainly outweigh the risks. Sources Article 1 - Ford's failure: http://www.chinadaily.com.cn/english/doc/2004-10/22/content_384782.htm Article 2 - Highway improvements: http://www.usatoday.com/news/world/2006-01-29-china-roads_x.htm Article 3 - Bullet Train: http://www.npr.org/2011/06/14/137111321/full-steam-ahead-for-chinas-rail-links-abroad Others: "COMPETING IN CHINA'S AUTOMOBILE INDUSTRY", by Qingjiu (Tom) Tao. GB2ECASETaoTomChinaAuto1001.pdf "THE PAST, PRESENT, AND FUTURE OF CHINA'S AUTOMOTIVE INDUSTRY", by Matthias Holweg. www-innovation.jbs.cam.ac.uk/publications/.../holweg_past.pdf "GLOBALIZATION OF THE AUTOMOBILE INDUSTRY IN CHINA", by Lin Gan www.cicero.uio.no/media/1381.pdf ?? ?? ?? ?? ...read more.