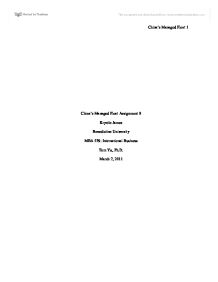 China vs The US Dollar- Managed Float

China's Managed Float Assignment 8 Krystle James Benedictine University MBA 539: International Business Tom Yu, Ph.D. March 7, 2011 In 1994 china pegged the value of its currency, the Yuan, to the U.S. dollar at an exchange rate of $1= 8.28 Yuan. For the next 11 years, the value f the Yuan moved in lockstep with the value of the U.S. dollar against other currencies. By early 2005, however, pressure was building for China to alter its exchange rate policy and let the Yuan float freely against the dollar. Underlying this pressure were claims that after years of rapid economic growth and foreign capital inflows, the pegged exchange rate undervalued the Yuan by as much as 40 percent. ...read more.

Keeping Yuan pegged to the dollar was also becoming increasingly problematic for the Chinese. The trade surplus with the United States, coupled with strong inflows of foreign investment, led to a surge of dollars into China. To maintain the exchange rate, the Chinese central bank regularly purchased dollars from commercial banks, issuing the Yuan at the official exchange rate. As a result, by mid 2005 China's foreign exchange reserves had risen to more than $700 billion. The Chinese were reportedly buying some $15 billion each month in an attempt to maintain the dollar/Yuan exchange rate. When the Chinese central bank issued Yuan to mop up excess dollars, the authorities in were effect expanding the domestic money supply, leading to a growing concern that excessive lending could create a financial bubble and a surge in price inflation, which might destabilize the economy. ...read more.

With the U.S. trade deficit with China hitting a new record of $202 billion in 2005, Senators Schumer and Graham once more crafted a Senate bill that would place a 27.5% tariff in Chinese imports unless the Chinese allowed the Yuan to depreciate further against the dollar. The Chinese responded by inviting the senators to China and convincing them that the country would move progressively towards a more flexible exchange rate policy. Over the next year the Chinese appeared to let the Yuan continue to appreciate against the dollar. In the last quarter of 2007, for example, the Yuan appreciated at annual rate of 13% against the dollar, the fastest pace since the peg to the dollar was abandoned. There seemed to be two reasons for this; first, arising Yuan helps the Chinese to keep inflation in check, and second, the cost of holding down the Yuan were becoming excessively high. ...read more.