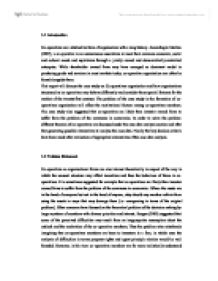 1.1 Introduction Co-operatives are a distinctive form of organisation with a long history. According to Mullins (2007), a co-operative is an autonomous association to meet their common economic, social and cultural needs and aspirations through a jointly owned and democratically-controlled enterprise. While shareholder owned firms may have emerged as dominant model in producing goods and services in most markets today, co-operative organisation can often be found alongside them. This report will discuss the case study on Co-operatives organisation and how organisations structured as co-operatives may behave differently and consider those special features for the market of the twenty-first century. The problem of the case study is the formation of co-operatives organisation will affect the motivational factors among co-operatives members. The case study also suggested that co-operatives are likely than investor owned firms to suffer from the problem of the commons in economics. In order to solve the problem different theories of co-operatives are discussed under the case data analysis section and after that generating possible alternatives to analyse the case data. Finally the key decision criteria have been made after evaluation of appropriate alternatives of the case data analysis. 1.2 Problem Statement Co-operatives as organisational forms are also interest theoretically in respect of the way in which the unusual structure may affect incentives and thus the behaviour of those in co-operatives. It is sometimes suggested for example that co-operatives are likely than investor owned firms to suffer from the problem of the commons in economics: Where the assets are in the hand of everyone but not in the hand of anyone, why should any member refrain from using the assets in ways that may damage them (i.e: overgrazing in terms of the original problem). Other concerns have focused on the theoretical problem of the decision making by large numbers of members with diverse priorities and interest. Borgen (2003) suggested that some of the perceived difficulties may result from an inappropriate assumption about the outlook and the motivation of the co-operative members. ...read more.

Thirdly, the objectives of a co-operative are not ways easily clearly defined in quantifiable terms, particularly their social goals, which can make accountability and performance measurement complicated and sometimes easy to fudge. The insider attempt to subvert the former CWS Ltd, now the Co-operative Group, is still a fresh memory. Today the economic realities of globalisation are forcing the co-operative sector to merge and even acquire new businesses. Under these conditions the lay board's dependency on professional management can only grow. Given the disadvantages the lay boards will have vies a vies their managers the need to revise the relationship and move from a civil service model of division of powers to a value based model which incorporates a unified culture and recognises the role and responsibility of management for the whole co-operative enterprise. 1.4 Generating Alternatives In order to generating alternatives of the given case data analysis, author can suggest the some motivational theories. According to Buchanan & Huczynsk (2004), motivation can be regarded as a broad concept, which includes preferences for particular outcomes, strength of effort (half-hearted or enthusiastic) and persistence (in the face of barriers). Wendy et.al (2003) suggest that motivation involves a conscious decision to perform one or more activities with greater effort than one performs other activities competing for attention. Porter and Lawler (1968 cited in Canales and Ku�ster, 2008) believe that it is important to allow for the fact that extra levels of effort do not always lead to improved performance. 1.4.1 Maslow's hierarchy theory Maslow's need hierarchy theory proposes that motivation should address five basic needs. They are physiological, safety, love, esteem, and self-actualization. According to Maslow's beliefs these needs "generally emerge in a predictable stair-step fashion" (Kreitner & Kinicki, 2003). According to Kreitner & Kinicki (2003), Maslow's given the hierarchy needs for employees expectation towards organisations, before starting about the employees' expectation, the employees needs are important; usually they have some hierarchy needs which are; self actualization needs, esteem needs, belonging needs, safety and security needs and psychological needs . ...read more.

It uses many principles of information processing approaches and of reinforcement, most specifically social learning theory, to explain how goals motivate people. This relates to motivation system of co-operative organisation as all the stakeholders has target and by achieving them they are rewarded with commission, bonuses, salary increment or promotion. (Wendy et al. 2003). 1.6 Final Thoughts Motivated, hard-working employees are crucial to the co-operative organisation's success. When people lose their motivation, however, their job performance suffers hence they become less productive, less creative, less of an asset to the company. There are several factors that have been identified in the data analysis in order to motivate the co-operative members to minimize organisation conflict. Firstly it is important to create a positive environment. An office atmosphere that makes all employees feel worthwhile and important can increase productivity. Secondly it is critical to help employees improve their professional skills by providing on the job training. Employees will feel the company is investing in them, and this will translate into an improved job performance. In addition it is also important strategy to acknowledge the contribution. It makes a huge difference in employee morale simply by taking the time to recognise each employee's contributions and accomplishments. Offering incentives to the sales people is also critical to increase sales performance. Performance based bonus and salaries can effectively motivate employees and it can impressively increase sales performance. For example co-operative organisation provides with salary increase and special commission to its salespeople in term of target achievement. It would also be good strategy to help employees reach the next level professionally by providing onsite coaching. Individual counselling can help people learn how to overcome personal or professional obstacles on their career paths. For example at co-operative organisation, when sales people failed to perform the managers arrange to talk with the employee and find out the reason why the employee does not perform well. If the employees lack professional knowledge, the company will arrange the professional training for them. In summary, the motivating strategies mentioned above can maximize salespeople's productivity, which can lead to effective increase organisational performance. ...read more.