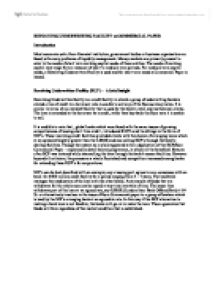 REVOLVING UNDERWRITING FACILITY vs COMMERCIAL PAPER Introduction Most economic units like a financial institution, government bodies or business organisation are faced with every problems of liquidity management. Money markets are primarily present to cater to the needs of short term working capital needs of these entities. The needs of working capital may range from a measure of short to medium term periods. For medium term capital needs, a Revolving Underwritten Facility is used and for short term needs a Commercial Paper is issued. Revolving Underwritten Facility (RUF ) - A brief insight Revolving Underwritten facility is a credit facility in which a group of underwriting bankers extend a line of credit to a borrower who is unable to sell any of the Eurocurrency notes. It is similar in terms of an overdraft facility that is used by the bank's retail and institutional clients. The loan is extended to the borrower as a credit, rather than buy back the Euro note it is unable to sell. It is credible to note that , global banks which were faced with the same issues of growing competiveness of issuing short time credit , introduced RUF's and its siblings in the form of NIF's. These revolving credit facilities provided clients with the choice of arranging loans which at an spread of slightly greater than the LIBOR and also selling ECP's through the bank's dealing facilities. ...read more.

The consensus drafted during the start of the process also mentions the share of each panel member. Any of the notes which cannot be placed are taken over by the panel members. In contrast with the NIF, the Revolving Underwritten facility differs when different agents are used in the distributing ECP at rates which are substantially lower than bank rates. Roy(2003) states that the members of the tender panel and placement agents can bid at whatever rates they want to bid, so that it can result in a highest bid, but can be replaced by the issuer if the payments have not been satisfactory. So in turn this competitive bidding will seek to provide money market rates to the issuing party. Often these rates are lesser than the rates offered by large individual banks and they typically fall in between LIBOR and LIBID, which is called as LIMEAN, resulting in saving of 3/8% to 1/2%. Issuers with very high credit ratings, rely on their own ability to sell the ECP by creating a secondary market for the same. This helps to relinquish the underwriting facility offered by the NIF's, thereby saving on the participation and the brokerage fees charged by banks. Commercial Paper and its Global Market Commercial papers are short term unsecured money market instruments which has maturity dates of usually less than a year. ...read more.

With the US federal reserve pumping taxpayer money into the US economy in an effort to unfreeze global credit markets, the CP market benefitted and picked up a notch to $8.2 billion in the US alone. (Reuters, March 2009). RUF or Commercial Paper ?- The optimal choice. In recent times, both the RUF and NIF have ceased to exist. The Euronote facility itself was very successful in 1980's. It has been duly replaced by the Euro Commercial Paper program and has been very successful until the onset of the financial crisis of 2007. In practice, small business will not have any authority to sell commercial paper, unless they have a suitable credit rating. A firm in that case can only choose to obtain a bank's line of credit and will be obliged to pay up underwriting and participation fees to the syndicate. At any point during a recession, credit rating of various companies falls, making it difficult for an organisation to sell its commercial paper. During such times, a more viable option for corporations is to seek out a syndicated loan or a short term loan, at a higher cost of interest. Sometimes the sheer volume of the big loans, makes the syndication, a complex and time consuming procedure. Nevertheless, once the formal agreements have been made, the lead bank benefits largely from the deal. At all other times, a corporation or public house must try to look towards commercial paper markets as a cost effective method of financing its short term operations. ...read more.