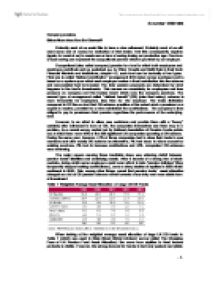 Company pensions - Bitten More than Can Be Chewed?

Company pensions Bitten More than Can Be Chewed? Probably each of us would like to have a nice retirement. Probably most of us will need some sort of money for realization of that desire. And this consequently requires (again, for most of us) to create some form of saving during our productive age. One form of such saving can represent the occupational pension which is provided by our employer. Occupational (also called company) pension is a fund to which both employees and employers contribute and as explained e.g. by Peter Howells and Keith Bain in their book Financial Markets and Institutions, chapter 4.2, such fund can be basically of two types. First one is called "defined contribution" arrangement (DC) (also money purchase) and is based on a system upon which each employee makes a fixed contribution into the scheme and accumulated fund is invested. The later pension payments are determined by what happens to the fund's investments. This causes an uncertainty for employees and less pressure on company and the trustee board which runs the company pensions. ...read more.

in Table 1 (which was used in State Street Global Advisors' survey called The Changing Face of UK Pension Fund Asset Allocation) the move from equities to fixed income products is visible. However, the strong demand for bonds in fact only pushed real yields lower making the investment of that kind less profitable. With conjunction with falling real interest rates pushing up the net present value of funds' liabilities the most companies see their DB scheme in deep deficit. The article from the recent edition of The Economist (January 28th-February 3rd 2006, p.13) estimates the collective black hole in Britain is anything between �40 and �300 billion depending on the measure. Valuation of liabilities is another factor that plays an important role in DB scheme because it provides another feedback implication on asset allocation. As the report of UK Pension Fund Management points out, meanwhile few would now justify valuing assets on anything other than a market basis, there are three official valuation bases for pension liabilities in the UK. ...read more.

Sainsbury's currently faces �582m deficit in its two DB schemes (already closed to new members) which according to new agreement will be eliminated by injection of �350m and increasing annual contributions from the employer's side. In addition each member of those DB schemes has a choice: either they increase contributions thereby keeping projected pension payments after retirement or sustain their contributions at current level but their projected pension payments will not be based on final salary but only on their average career salary. After all, even though the lucky members of DB schemes will be given their pensions in proper instalments and will probably have a nice time after retirement, the price for it was not in most cases worth it. The question is whether the final salary scheme will ever be widely used and run again. Yes, perhaps. When the mathematical methods will be unified and reliable and investments secure and highly predicted. Till then though, the people running DB will be under pressure and in doubt about investment performance and will be most likely looking forward to one thing ... pension. ?? ?? ?? ?? ID number: 05501963 - 1 - ...read more.