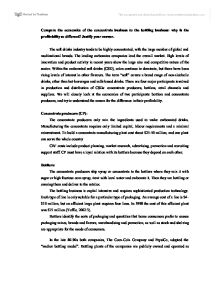 Compare the economics of the concentrate business to the bottling business: why is the profitability so different? Justify your answer.

Compare the economics of the concentrate business to the bottling business: why is the profitability so different? Justify your answer. The soft drinks industry tends to be highly concentrated, with the large number of global and multinational brands. The leading carbonates companies lead the overall market. High levels of innovation and product activity in recent years show the large size and competitive nature of the sector. Within the carbonated soft drinks (CSD), colas continue to dominate, but there have been rising levels of interest in other flavours. The term "soft" covers a broad range of non-alcoholic drinks, other than hot-beverages and milk-based drinks. There are four major participants involved in production and distribution of CSDs: concentrate producers, bottlers, retail channels and suppliers. We will closely look at the economies of two participants: bottlers and concentrate producers, and try to understand the reason for the difference in their profitability. Concentrate producers (CP): The concentrate producers only mix the ingredients used to make carbonated drinks. Manufacturing the concentrate requires only limited capital, labour requirements and a minimal reinvestment. To build a concentrate manufacturing plant cost about $25-50 million, and one plant can serve the whole country CPs' costs include product planning, market research, advertising, promotion and recruiting support staff. CP must have a loyal relation with its bottlers because they depend on each other. Bottlers: The concentrate producers ship syrup or concentrate to the bottlers where they mix it with sugar or high fructose corn syrup, treat with local water and carbonate it. ...read more.

Through their DSD practices, these companies had intimate relationships with their retail channels and would be able to defend their positions effectively through discounting or other tactics. So, although the CP industry is not very capital intensive, other barriers would prevent entry. Entering bottling, meanwhile, would require substantial capital investment, which would prevent companies from entering the industry. Further complicating entry into this market, existing bottlers had exclusive territories in which to distribute their products. Regulatory approval of "intrabrand" exclusive territories, via the Soft Drink Interbrand Competition Act of 1980, ratified this strategy, making it impossible for new bottlers to get started in any region where an existing bottler operated, which included every significant market in the US. From Porter's Five Forces we can clearly see that profits of the concentrate businesses and the bottlers businesses are different. Concentrate business has high margins, high returns and high cash generation. While bottling business's features are low margins, low return, capital intensification and high debt creation. Bottlers have less profitability as CPs have more market power through efficient barriers to entry, and effectively price discriminate through various retail channels. These businesses are interdependent and profits of one business depend on the success of another. The closest possible coordination between the CPs and their bottlers is one of the most strategic assets. Can Coke and Pepsi sustain their profits into the future in the wake of flattening demand and the growing popularity of non-carbonated drinks? Justify your answer. The Coca-Cola Company is the world's largest beverage company and is the leading producer and marketer of soft drinks. ...read more.

The only sizeable US brand is Coca-Cola's Powerade, with a market share of 9%. Coca-Cola also has its multinational Aquarius brand, available in a number of European markets and Japan. In 2000 PepsiCo took over of Quaker, including its market-leading Gatorade sports drinks brand. Many analysts projected Gatorade's sales could grow as much as 20% annually between 2000 and 2010 (Strickland, 2003:C-530). Innovation in the drinks has resulted in a steady stream of hybrid, cross-over drinks, which can create their own markets. These include the most prominent RTD drinks, such as Oasis (from CCSB) and wide range of exotic hybrids. Products containing blends of mineral water and fruit juices have also emerged. These drinks target at sophisticated adult markets as alternatives to alcohol and hot beverages. In the standard market sectors - carbonates, juices and fruit drinks, and water - developments are likely to center on new flavors in carbonates, exotic blends and fortification in juices, and fortification, flavoring and carbonation levels in water. Products such as adult RTD beverages, sports and energy drinks have illustrated the opportunities available for carefully targeted marketing to specific consumer groups. A feature of soft drinks development is the stretching of established brands to cover new or specialist consumer demand. Coca-Cola and Pepsi companies expressed confidence in the future growth of the companies and the growth of their profits. Pepsi's vice-president expressed the new strategy of the company: "If Americans want to drink tap water, we want it to be Pepsi tap water" (Yoffie, 2002:13). The late Roberto Goizueta came up with useful analogy: in English-speaking countries, the C on the kitchen tap stand for cold water and H for hot, but Mr Goizueta said he would never rest until the C stood for Coke. ...read more.