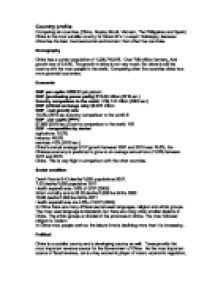 Comparing six countries (China, Russia, Brazil, Vietnam, The Philippines and Spain) China is the most suitable country for Sloten B.V. to export Nuklospry,

Country profile Comparing six countries (China, Russia, Brazil, Vietnam, The Philippines and Spain) China is the most suitable country for Sloten B.V. to export Nuklospry, because china has the best macroeconomic environment than other five countries. Demography China has a current population of 1,336,718,015. Over 700 million farmers, And growth rate of 0.43%. The growth in china is not very much. But china is still the country with the most people in the world. Comparing other five countries china has more potential customers. Economic GNP per capita: $865.03 per person GDP (purchasing power parity):$10.09 trillion (2010 est.) Country comparison to the world: 3 $9.144 trillion (2009 est.) GDP (official exchange rate):$5.878 trillion GDP - real growth rate: 10.3% (2010 est.)Country comparison to the world: 6 GDP - per capita (PPP): $7,600 (2010 est.)Country comparison to the world: 125 GDP - composition by sector: agriculture: 10.2% industry: 46.9% services: 43% (2010 est.) China's annual average GDP growth between 2001 and 2010 was 10.5%, the Chinese economy is predicted to grow at an average annual rate of 9.5% between 2011 and 2015 China. This is very high in comparison with the other countries. Social condition Death Rate is 6.43 deaths/1,000 populations 2001. 7.03 deaths/1,000 population 2011 Health expenditures: 4.6% of GDP (2009) Infant mortality rate is 25.28 deaths/1,000 live births 2005 16.06 deaths/1,000 live births 2011 Health expenditures are 4.6% of GDP (2009) In China there are many differences between languages, religion and ethnic groups. The most used language is Mandarin, but there are many other smaller dialects in China. The ethnic groups or divided in the provinces in China. The most followed religion is Daoism. In China most people work so the leisure time is declining more than it is increasing. Political China is a socialist country and a developing country as well. Taxes provide the most important revenue source for the Government of China. ...read more.

The odds of a corrupt official going to jail are less than three percent, making corruption a high-return, low-risk activity. Even low-level officials have the opportunity to amass an illicit fortune of tens of millions of Yuan. China Geographic aspects and distribution 1. Is it easy to reach the buyers? Point 1 in China the buyers are easy to reach because the size of the country. Buyers are always looking for new interesting products that aid them in their sector. Point 2 China is the largest user of electronics because they are the largest market of production electronics. Point 3 China is the second country with longest amount of roadways and third country with longest amount railways. And quality is very well because they don't have to improve them often. Point 4 China is not a very hot country so when it comes to exporting cold products no problems will be encountered. Point 5 the distance between the Netherlands and china is approximately 8867.49 kilometers. In china, there are just over 1.3 billion people (1,330,044,605 as of mid-2008). 2. Means of communication: telephone, fax, radio, television, internet and postal service? In China, there are about 420 million people using the internet. The mobile phone users have reached 10.6 billion. Fax, radio, postal services are also mature. 3. Quality of infrastructures: roads, harbors, rivers, rail services and air traffic? In china, In 2010, the railway network has since been expanded to 91,000 km. "National Trunk Highway System " has expanded the network to more than 74,000 km by the end of 2010. 4.Impact of the local climate: exporting fresh food products to hot countries often results in high refrigeration costs. 5. Distance from the Netherlands: contributes to the final costs of transports Climate about China, it has a climate dominated by dry seasons and wet monsoons. The climates differ from region to region because of the country's extensive and complex topography. ...read more.