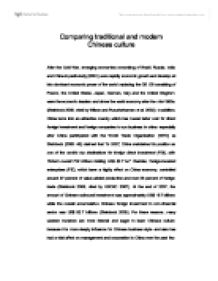 Comparing traditional and modern Chinese culture After the Cold War, emerging economies comprising of Brazil, Russia, India and China in particularly (BRIC) were rapidly economic growth and developed into dominant economic power of the world replacing the G6. G6 consisting of France, the United States, Japan, German, Italy and the United Kingdom were the economic leaders and drove the world economy after the mid-1980s. (Steinbock 2008, cited by Wilson and Purushothaman et al. 2003). In addition, China turns into an attractive country which has lowest labor cost for direct foreign investment and foreign companies to run business in china especially after China participated with the World Trade Organization (WTO) as Steinbock (2008: 48) claimed that "in 2007, China maintained its position as one of the world's top destinations for foreign direct investment (FDI), with China's overall FDI inflows totaling US$ 82.7 bn". Besides, foreign-invested enterprises (FIE), which have a highly effect on China economy, controlled around 27 percent of value-added production and over 58 percent of foreign trade (Steinbock 2008, cited by USCBC 2007). At the end of 2007, the amount of Chinese outbound investment was approximately US$ 18.7 billions while the overall accumulative Chinese foreign investment in non-financial sector was US$ 93.7 billions (Steinbock 2008). For these reasons, many western investors are more interest and eager to learn Chinese culture because it is more deeply influence for Chinese business style and also has had a vital affect on management and corporation in China over the past few decades (Steinbock 2008, cited by Warner and Joynt 2002) ...read more.

Many twenties and thirties young urbanites have been opened to Western business styles by attending MBA programs or working in foreign organizations. The new generations tend to rely on their own qualifications in stead of get their positions through their old tradition, a guanxi network. They are likely to have more abilities and confident to make decision than their prior generation. They also have a tendency to speak directly and less tend to be worried about losing or saving face. People in Generation Y are more inclined to read book concerning business success by Warren Buffet or Donald Trump than the Analects of Confucius or Mao Zedong's the collective works. For new generation, making profit and getting forward are often more essential than concerns about damaged relationship between their colleagues or group dynamics. It can be concluded that, guanxi is very crucial for foreign business people to have a deep understanding Chinese traditional cultures such as face, guanxi and other subtle aspects of business Chinese cultures when doing business with older Chinese generation, Chinese colleagues with age over 35. Nevertheless, those cultures are quite less essential when meeting with the younger urbanites. The increasing significance of business principles and potentials makes it easier for foreign companies to run business without relying on complex of guanxi network in modern China mainland. The shift toward the rule of law in China also makes guanxi less necessary. However, guanxi is indeed still significant, in other words, guanxi is a simple fact of Chinese's lives that can help anywhere with having the right networks but it is not the golden ticket to acquiring good jobs and achieves business success in China any longer (Fox S, 2008). ...read more.

When received praise on superb home-cooked meal from guests, a Chinese host should be more liable to make a self-deprecating reply concerning the evening rather than accept an admiring comment about food. The accepting praises directly are also considered an impolite action. On the other hand, there are some differences between humility and humbleness. It is considered well-mannered to display humility in one's actions, the inclination of the China millionaires to show their wealth and prosperity is any actions while humble. The rich in China living in a gated society and driving a luxurious car is absolutely not humble whereas when asked about their business, they will state that the business is not to be doing well with the purpose of attempt to display humility (Fox S, 2008). Conclusion Even though, many modern Chinese cultures have been greatly changed from tradition cultures by western cultural influence such as Chinese hair style and clothes with obviously affects from western cultures but some tradition Chinese culture carry on to be a heritage pass thought next generation and still be a nucleus of modern Chinese culture, for instance Confucius and Guanxi network and face which continues embedded in Chinese people today. Modern Chinese cultural in term of guanxi network and Face a bit changes from traditional cultures which guanxi and face slightly less important among the new generation or Generation Y, who younger than 35 years. While, the new generation has more individualism than older people but they did not give up Confucius. Confucianism still diffuses over China mainland and strongly influences on attitude of younger generation in the present day. ...read more.