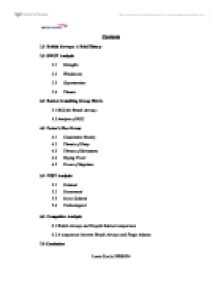 Contents 1.0 British Airways: A Brief History 2.0 SWOT Analysis 2.1 Strengths 2.2 Weaknesses 2.3 Opportunities 2.4 Threats 3.0 Boston Consulting Group Matrix 3.1 BCG for British Airways 3.2 Analysis of BCG 4.0 Porter's Five Forces 4.1 Competitive Rivalry 4.2 Threats of Entry 4.3 Threats of Substitutes 4.4 Buying Power 4.5 Power of Suppliers 5.0 PEST Analysis 5.1 Political 5.2 Economical 5.3 Socio-Cultural 5.4 Technological 6.0 Competitor Analysis 6.1 British Airways and EasyJet Internet comparison 6.2 A comparison between British Airways and Virgin Atlantic 7.0 Conclusion Strategic Analysis The organisation which I have chosen to compile a strategic analysis for is the reputable airline British Airways. The following areas have been tackled in the report: * The company history * A SWOT analysis * A product portfolio analysis using the BCG Matrix * An analysis of the competitive environment, using the Porter's Five Forces model * A competitor analysis * A PEST analysis. 1.0 British Airways: A brief history British Airways can trace its origins back to the birth of civil aviation, the pioneering days following World War I. On 25 August 1919, its forerunner company, Aircraft Transport and Travel Limited (AT&T), launched the world's first daily international scheduled air service between London and Paris. That initial flight, operated by a single-engine de Havilland DH4A biplane taking off from Hounslow Heath, near its successor company's current Heathrow base, carried a single passenger and cargo that included newspapers, Devonshire cream and grouse. It took two and a half hours to reach Le Bourget. Shortly afterwards, two more British companies started services to Paris, and to Brussels. In July 1979, the Government announced its intention to sell shares in British Airways. The Civil Aviation Act 1980 was passed to enable this to happen. Lord King was appointed Chairman in 1981 and charged by the Secretary of State for Trade to take all necessary steps to restore the Group to profitability and prepare it for privatisation. ...read more.

2.4 Threats * Strong competition - BA has many competitors, the main competitors it has on trans-atlantic operations is Virgin Airlines. For shorter routes, the main threats are EasyJet, Ryanair and Monarch. Increased competition is a benefit for the consumer but not for businesses. BA simply hasn't sufficient financial resources to warrant cheap European flights. * Fuel costs - the cost of oil and other fuels are constantly rising. One of the worlds largest sources for oil is Iraq, which is of course under attack from the U.S and the U.K. This is resulting in far less oil being exported which in turn forces distributors to sharply raise their prices. * Terrorist attacks - this is a major physical threat to not only BA but to all airlines. With an increasing number of attacks being carried out, consumers are far more concerned about flying, especially to the US, than they were five years ago. Apart from increased security levels, there is no specific way to stop these attacks, causing the trans-Atlantic market to decline dramatically. * Global recession - A recession on a global scale would mean that firms would not be able to afford executive travel, as offered by BA. It would result in BA's "cheaper" competitors gaining yet more market share. This is likely to leave many of BA's fleet grounded and an increasing number of staff redundant. From the above analysis, it is clear to see that British Airways is in an unsteady position. Not only are their finances in turmoil but competition seems to get stronger everyday. BA does not focus enough on attracting new customers which means they would go to one of the competitors. An uncertain future lies ahead of the organisation, which is certainly not being helped by the war in Iraq. 3.0 Boston Consulting Group Matrix The Boston Consulting Group Matrix (BCG) is a well known tool for business strategists. ...read more.

(http://www.virgin-atlantic.com/en/gb/corporateandtrade/flyingco/news/vacomestop.jsp). Air France Airline, Lufthansa Airline and Swiss Airline also have their own competition advantages, such as the location advantage, being in the middle of the Europe. I think that BA has a competitive advantage over its competitors. That advantage being its business class and reward offers for customer loyalty. BA needs to continue to focus on this in order to keep such an advantage but risks on losing out on potential customers/passengers. 7.0 Conclusion From analysing all the information shown in this report, I think that British Airways plc needs to inspire innovation in order to keep up with their competitors. I cannot see them competing with EasyJet and Ryanair on price in the foreseeable future but I think that they should consider an alliance with either another airline or a hotel group. If BA manage to acquire a firm such as Ryanair, I think they will be one step closer to giving EasyJet further competition. Although such an acquisition would cost vast amounts of money, adding to BA's debt, I think it would be a good investment in the long run. If they start to take customers away from EasyJet's services then BA will slowly but surely begin to crawl out of the debt in which they currently sit. I also think that BA needs to consider a marketing campaign in order to gain more customers. Although they look after their current customers very well, they need to gain more if they want their bank balance to look more promising. Not focusing on gaining potential customers can be the major downfall of many organisations. Looking after their current customers well is a very effective way of retaining them for repeat business, but new customers would bring much welcome cash flow to the firm in the long run. Such a dramatic debt is difficult to get out of, especially with many economic factors having negative impact on the organisation. Reference: www.britishairways.com www.iata.org http://finance.yahoo.com www.thomsonfinancial.com www.virgin-atlantic.com www.easyjet.com www.ryanair.com www.mintel.com Exploring Corporate Strategy; Johnson & Scholes, 6th Edition. Lecture Handouts Seminar/Lecture notes Lewis Conlin 20099556 ...read more.