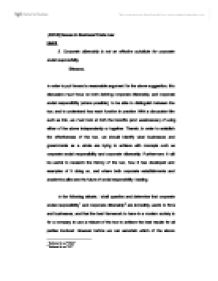 Corporate citizenship is not an effective substitute for corporate social responsibility. Discuss. In order to put forward a reasonable argument for the above suggestion, this discussion must focus

[22123] Issues in Business/Trade Law List B 5. Corporate citizenship is not an effective substitute for corporate social responsibility. Discuss. In order to put forward a reasonable argument for the above suggestion, this discussion must focus on both defining corporate citizenship, and corporate social responsibility (where possible), to be able to distinguish between the two, and to understand how each function in practice. With a discussion title such as this, we must look at both the benefits (and weaknesses) of using either of the above independently or together. Therein, in order to establish the effectiveness of the two, we should identify what businesses and governments as a whole are trying to achieve with concepts such as corporate social responsibility and corporate citizenship. Furthermore, it will be useful to research the history of the two, how it has developed and examples of it doing so, and where both corporate establishments and academics alike see the future of social responsibility leading. In the following debate, I shall question and determine that corporate social responsibility1 and corporate citizenship2 are incredibly useful to firms and businesses, and that the best framework to have in a modern society is for a company to use a mixture of the two to achieve the best results for all parties involved. However before we can ascertain which of the above mentioned a company should look to incorporating; we should take each individually in order to further understand how they work or do not as the case may be. The first problem that we should consider is that when it comes to defining CSR and CC, there are no actual clear definitions3. ...read more.

Faced with this kind of social protest, a few farsighted business executives advised corporations to use their power and influence voluntarily for broad social purposes rather than for profits alone. Automaker Henry Ford developed programs to support the recreational and health needs for his employees19, prompting initially internal strategies, but ultimately CSR and CC outside of the business sphere. The point to note is that company leaders believed that the business had a responsibility to society that went beyond, or worked in parallel with their efforts to make profits, and began to consider interests other than just shareholders.20 Not only did this prompt regulatory review on matters21, but paved the way for developed paternalistic programmes found internally and externally in relation to social responsibility. Companies became keener to move away from just giving money to charity, known as the charity principle22, or as being a trustee to the public's interest, referred to as the stewardship principle23. These two early principles established the original meaning of CSR. It became apparent as suggested that private institutions who were exercising a degree of public power, required some level of accountability and responsibility for their actions. Measures existed, and continue to do so, to help maintain a degree of control over firms, and their directors, in the sense of legislation24, common law25, and shareholder rights to limit directors' power26, yet a great deal of these are internal, or only affect a company decision in the extreme cases. Therein, there was limited law or rulings available for the checks and balances regarding legitimate business decisions in an external context. Moreover, governments were unenthusiastic to introduce stringent business law, as they wanted to maintain good relations with the firms that were working within their countries, whom contributed to the economy. ...read more.

The degree that both CSR and CC have achieved their objectives therein depends on the level of priority the individual company gives to each. In this way, government initiatives are one of the best ways at present to enable companies to understand, and to act on social accountability and responsibility. The sense of responsibility therefore still seems to be very much a broad concept. Through the introduction of the Global Compact firms must now respond to social responsibility and account for actions therein.36 Yet however, without sufficient enforcement policies, the Global Compact will always be unable to fully account for business practices, negating the real reason of its purpose. CC and CSR should not necessarily be theories that should work independently in order to achieve responsibility and accountability. Through a successful implementation in a business context, both could quite easily be adhered to, with a minimal loss of profit. As suggested, using either CC or CSR could either benefit the company or hinder it financially, but ultimately both can compliment each other. In this way firms should try to look at social responsibility not necessarily in a pure economical way, but also ethically. Especially in a modern context with increased media and activist group attention on all activities that businesses carry out. As suggested the main reason supporting the two theories is to try and ascertain a higher level of accountability. Both theories can achieve this function, but only as far as the company is willing to adhere to it. Subsequently until further regulations exist it should be suggested that both compliment each other in trying to achieve the goal of responsibility and accountability. CC seems to still be in an early phase of development, and perhaps with effective compliance and monitoring, it can become what CSR tried to accomplish. ...read more.