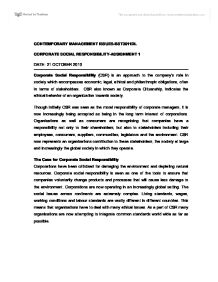 CONTEMPORARY MANAGEMENT ISSUES-BST3011DL CORPORATE SOCIAL RESPONSIBILITY-ASSIGNMENT 1 DATE: 21 OCTOBER 2010 Corporate Social Responsibility (CSR) is an approach to the company's role in society which encompasses economic, legal, ethical and philanthropic obligations, often in terms of stakeholders. CSR also known as Corporate Citizenship, indicates the ethical behavior of an organization towards society. Though initially CSR was seen as the moral responsibility of corporate managers, it is now increasingly being accepted as being in the long term interest of corporations. Organisations as well as consumers are recognising that companies have a responsibility not only to their shareholders, but also to stakeholders including their employees, consumers, suppliers, communities, legislators and the environment. CSR now represents an organisations contribution to these stakeholders, the society at large and increasingly the global society in which they operate. The Case for Corporate Social Responsibility Corporations have been criticised for damaging the environment and depleting natural resources. Corporate social responsibility is seen as one of the tools to ensure that companies voluntarily change products and processes that will cause less damage to the environment. Corporations are now operating in an increasingly global setting. The social issues across continents are extremely complex. Living standards, wages, working conditions and labour standards are vastly different in different countries. This means that organisations have to deal with many ethical issues. As a part of CSR many organisations are now attempting to integrate common standards world wide as far as possible. ...read more.

There are concerns that organisations are not equipped to deal with social issues, and in fact, corporate involvement in complex societal issues may make the situation worse. CSR is also criticised as being simply a marketing tool for organisations to gain publicity and that corporations undertake CSR activities out of selfish interests. Also, corporations are being viewed with a degree of mistrust and suspicion which has caused more discussion within the CSR movement. For example, the collapse of ENRON in 2001 has raised many questions about the real validity of the many CSR activities that it had undertaken. Before filing for bankruptcy in 2001, Enron Corporation was one of the largest integrated natural gas and electricity companies in the world. It marketed natural gas liquids worldwide and operated one of the largest natural gas transmission systems in the world, totaling more than 36,000 miles. It was also one of the largest independent developers and producers of electricity in the world, serving both industrial and emerging markets. Following the company's collapse, Enron has become a by-word for corporate irresponsibility. The financial misrepresentation that covered-up the giant black hole at the heart of the company's finances have fuelled interest in how such corporations can be identified and held to account. This is made all the more challenging on account of that fact that - to some observers - Enron was doing the whole "social responsibility thing" with its CSR reporting, environmental and community programmes. ...read more.

Some firms will produce goods or services with attributes or characteristics that signal to the consumer that the company is concerned about certain social issues. Also, many companies will try to establish a socially responsible corporate image. Both of these strategies will encourage consumers to believe that, by consuming the product, they are directly or indirectly supporting a cause. CSR may affect a firm's performance in more than one way. A more effective way for firms to approach CSR is through analyzing what gains can be made by strategically emphasizing a firms comparative advantages in some sectors over others. Other studies have attempted to empirically measure certain specific aspects of CSR and other facets of corporate and consumer behaviour. In a study done by Brown and Dacin, "...our results also suggest that CSR associations have a significant influence on consumer responses to new products. The results of all three studies demonstrate that negative CSR associations ultimately can have a detrimental effect on overall product evaluations, whereas positive CSR associations can enhance the product evaluations" (Brown and Dacin, 80). It is a tricky position for CEOs of companies to decide whether or not they should do CSR, and it is a difficult business decision to anticipate a consumer's reaction to such practices. More and more, companies have to deal with the prevalence of CSR advocates, and to take their responsibility and role in society seriously. Perhaps this is the most conclusive argument that can be made in favor of CSR at this time. Ergo, firms that avoid this new business reality, do so at their own peril. ...read more.