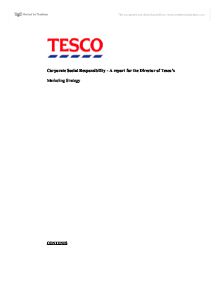 Corporate Social Responsibility - A report for the Director of Tesco's Marketing Strategy CONTENTS Introduction 1 Benefits of a good CSR policy 2,3 Impacts if not Introduced 4,5 Recommendations & conclusion 6,7 References & Bibliography 8 Corporate Social Responsibility - A report for the Board of Directors of Tesco's With the growth of Corporate Social Responsibility (CSR) in the majority of organisations over the last 20 years it is evident through developing strategies to incorporate CSR the importance it can have is widespread. Tesco's have used such strategies to enable them to gain competitive edge but at the same time neglected some of its responsibilities which has lead to missed opportunities & knocks on its reputation. The meaning of CSR given by the European Communities (2001) is "a concept whereby companies integrate social & environmental concerns in the business operations & their interactions with their stakeholders on a voluntary basis" This underlines the importance of getting it right in the overall view of an organisation to all stakeholders. This said it has been argued that this philosophy isn't as clear with Frankental (2001) who describes it as "a vague & intangible term which can mean anything to anybody, & therefore is effectively without meaning". There is a lot of confusion in regards to CSR & the extent to which it entails; who's responsibility is it? Some firms have seen CSR, encouraged it & embraced it trying to enable them to go forward. This being said some organisations have seen it as a means of meeting legislation & only doing what's the bear minimum required of them to avoid breaking legislation. ...read more.

who state "there has always been tensions between business & social goals". IMPACTS IF NOT INTRODUCED Through neglecting Corporate Social responsibilities can effect the marketing strategy which can lead to problems such as damage to reputation, loss of staff & potentially loss of its market share. To highlight the importance of getting it right & making sure that the CSR policy meets all targets intended, examples of problems that have been found within organisations, criticism made on Tesco's and other retailers & the extent to which those problems effected them. Although with the 2007 annual CSR review Chief Executive Sir Terry Leahy underlined the importance of bringing the community together, along with work currently done plans in are place to further that, they haven't revealed as to how or plans long-term. There is a part of the community that has been affected dramatically through the growth retailers have had, in particularly Tesco's's, over the last 20 years the local businesses such as butchers, newsagents & bakers. As Tesco's's have become more of a place of convenience & with the low price it has meant that many have gone out of business. Because of the buying power & superior resources that Tesco's's has & the shear size of the organisation it has enable them to lower prices to the extent where local shops just cant compete. Healthy eating has become as issue which has increased over the last few years & has been highlighted in the press by the school dinners campaign, calories & examples of high sugar & fat contents in foods. Tesco's's has had it fair share of bad press in respect of this including attacks on their pricing strategies, availability & ingredient content. ...read more.

With local businesses going out of business on a daily basis because of supermarkets this has hit all been brought on by retailers. Through working in the community more and looking at ways in which they can help local businesses, working with them & way sin which the two can work together. 4. SUPPLIERS - Many of the suppliers that Tesco's use & have used in the past have had problems with exploitation, working conditions & being under paid, a regular review of the way in which its suppliers operates would help & through deploying a code of conduct for its suppliers it can also make sure that legislation it met & that ethically they are meeting the standards they set. 5. ENVIRONMENTL ISSUES - The big steps that the company has made to improve Environmental problems have been widely documented but this needs to be continued & developed further as areas like waste, packaging & emissions have all been reduced but not by much. Research is needed into how this can be reduced or improved. 6. WORKFORCE - With the flexibility & diversity that Tesco's has sought in its workforce it has the potential to become innovative & a leading employer in the UK. By deploying more schemes including education, improved training, career progression & incentives this will help to keep the workforce & encourage them. CONCLUSION It is clearly evident that Tesco's have made major steps in order to embrace Corporate Social Responsibility & have utilised it to build on its core competencies to gain competitive edge in certain areas over its competition. Although these steps have been taken work is needed to be done on the areas in which the organisation has been criticised, there are several areas highlighted above that need to be addressed & met. ...read more.