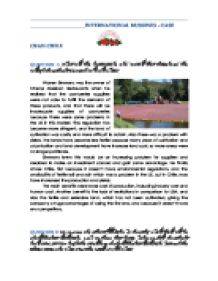 Cran chile case study. What are the motivations and factors that influenced the foreign investment decision for Carn Chile?

Other damages in agriculture may include an excessive use of fertilizer and pesticides or even contaminated water which may also affect consumers' health, and can cause huge media impact and damage the image of the company. In addition, deforestation and soil erosion are important issues to take care because the loss of woods in case of deforestation and because soil erosion can be a source of air pollution. Also, the company can cause damage because of the high consumption of oil and other fuels and he emission of large amounts of C02 which is responsible of the greenhouse effect. All of these problems caused by a wrong administration of the restrictions can influence the company in the long run. It may be highly effective at the beginning because of low costs, but it will later by punished by the ones who will be affected by these issues, or even the own host country may realize that the company is causing damage and may take actions against it. ...read more.

But this was a total failure in Japan and Chile, because of the acid flavor of the fruit. The most used expansion process of firms is exporting, which is chosen to be the first mode of entry when barriers and transportation costs are low and when they feel it could be safer because if they fail in the host country they won't lose anything but the transportation cost and barriers cost, but they won't have to spent in fabrics and initial investment costs. Nowadays this problem exists no more, because the cranberries are now being consumed around the world. Cran Chile has positioned as one of the largest producers and processors of cranberries in Latin America and has expanded its activities and it is even selling juice and juice and fresh and dried cranberries in different places. So even if the strategy was not normal, they could achieve lower cost of production, keep selling in their own country and satisfy the demand, and when other countries were ready to buy cranberries they had already learned about the process and gain economies of scale which let them grow and be successful in the industry. ...read more.