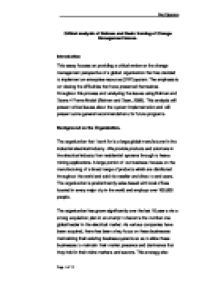 Critical analysis of Bolman and Deals framing of Change Management Issues. Introduction This essay focuses on providing a critical review on the change management perspective of a global organization that has decided to implement an enterprise resource (ERP) system. The emphasis is on viewing the difficulties that have presented themselves throughout this process and analyzing the issues using Bolman and Deans 4 Frame Model (Bolman and Dean, 2008). This analysis will present critical issues about the system implementation and will present some general recommendations for future programs. Background on the Organization. The organization that I work for is a large global manufacturer in the industrial electrical industry. We provide products and solutions in the electrical industry from residential systems through to heavy mining applications. A large portion of our business focuses on the manufacturing of a broad range of products which are distributed throughout the world and sold via reseller and direct to end users. The organization is predominantly sales based with local offices located in every major city in the world and employs over 100,000 people. The organization has grown significantly over the last 10 years via a strong acquisition plan in an attempt to become the number one global leader in the electrical market. As various companies have been acquired, there has been a key focus on these businesses maintaining their existing business systems so as to allow these businesses to maintain their market presence and dominance that they hold in their niche markets and sectors. This strategy also helped the larger organization in not having to develop integration strategies for all these new businesses and therefore could focus on their core objectives of acquiring more companies. As the company changed its strategy from acquisition to consolidation it identified that there was a need to start integrating each of the now isolated business units together. Similar to the decision by JTI a global tobacco company in 1999 where through acquisition the group was disparate, (Seguin and Pelster, 2005) ...read more.

The Human resource sees organisations needing to motivate individuals through their ability to use their skills and talents, so there is a mutual benefit to all parties. The organisation failed in this area by not recognising what was needed to identify the required skills and needs when embarking on this project. A significant pitfall was the issue of technology and the skill-sets of the employees to use this technology. The implementation of the ERP system saw a move to the reliance of staff to be more computer literate as the new system relied on users to interface with the ERP system via web based applications that were complicated to use and required many different log in environments. These were all new processes that needed to be learnt. The difficulty was that using these applications at the start of the new system led to constant PC failure which needed technical assistance from IT support. To make things even more difficult, the IT support team was based in India as the main Asia Pacific support team. Calls to request assistance with the language barriers was more a frustration than a help in overcoming simple log in problems. There was no local guidance at the country level to assist in any of the problematic issues that if corrected quickly would have reduced the frustration and the resistance to change. The difficulties in the project and the stress levels that were created in particular areas of the business caused a large disharmony in the workforce. There as a lot of talk about the benefits of the SAP system of improved efficiencies, this led to an expectation from the staff, that this meant a move towards a reduced workforce. With this feeling by many, the atmosphere in the workplace was chaotic, tense and very de-motivating. Employees were asking for support from the team but did not receive the support needed. ...read more.

But it is not just a matter of implementing a process with the right skills and technology. It's more importantly about the people. It is the people's perspective on what the system means to them and their beliefs for such a change to be successful. Employees lose a lot of their own personality in the trend towards globalization. In this particular example where the main impact has been the integration of multiple business units and at many levels, implementing an ERP system in this organization has seen a core change in the way that the organization is structured, the responsibilities that people have, the culture of the business and the management requirements needed. When implementing change such as this, the organization did not fully understand the impact that would see issues develop in the areas of communication, implementation of change, change review, people culture factors, barriers of change and leadership. Though process improvements is one area that needs addressing, it's the cultural and political areas that significantly limits change. (El Sawy, 1995) If the business is to move forward and learn from this experience in the way in which they implement future ERP systems in other counties, the organization needs to consider the change management process carefully when implementing change. Management must demonstrate total support for the system and admit to limitations early on rather than indicate that all is running smoothly when it is obvious to others that there are actually problems. The organization needs to identify and develop strategies for barriers in the area of authority and control. Political power players need to be identified and strategies implemented to get these people on board with the process so as to limit the negativity that may be raised through these people. And finally communication needs to be facilitating early and often enough to improve the transparency of information. (Kemp and Low, 2008) Education to employees must be a priority from the start of the project and various forms of training need to be implemented to ensure this. (Roberts and Barrar, 1992). ...read more.