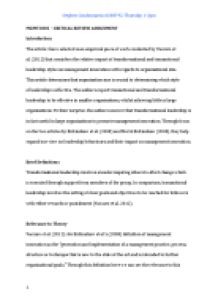 However, as it is important to remember with innovation, innovation does not necessarily mean creating an entirely ?new to the state of the art? concept, rather ?new to the organisation? is similarly a form of innovation (Birkinshaw et al. 2008). One example of management innovation explored by Vaccaro et al. (2012) is the ?self-managed teams? implemented at Procter & Gamble during the 1980s where teams became responsible for all their work patters including deadlines. Through initiating change in the structures, processes and practices of the firm, leaders brought about management innovation (Birkinshaw et al. 2008). Findings/Main Conclusions Vaccaro et al. (2012) express surprise in discovering that transformational leadership in fact had a positive influence on management innovation in both small and large, complex organisations. Initially the authors iterated large organisations were simply too large and complex for transformational leadership to inflict management innovation. However, through communicating a shared vision and developing a certain type of organisational culture (such as that developed at Procter & Gamble), leaders have the ability to unite workers who feel uncertainty in both small and large, complex organisations (Vaccaro et al. 2012 cite Birkinshaw et al. 2008). Vaccaro et al. cite Sarros et al. (2002) in proposing a potential reason for such an occurrence; that perhaps individuals in the organisation felt transformational leadership eclipsed the negative impact of bureaucracy and hierarchy, giving them some guidance in a complex system. ...read more.