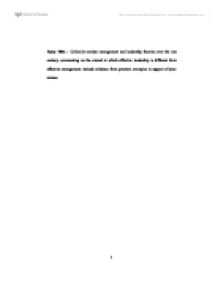 Critically analyse management and leadership theories over the last century, commenting on the extend to which effective leadership is different from effective management. Include evidence from practical examples in support of your answer.

Essay Title : Critically analyse management and leadership theories over the last century, commenting on the extend to which effective leadership is different from effective management. Include evidence from practical examples in support of your answer. When people work together, they can accomplish more than when they work separately. However, some groups are more successful at achieving their goals than other groups. The field of management explains why some organizations succeed while some others fail. In the broadest terms, management could be defined as "the process of planning, organizing, and controlling the performance of organisational members and of using all other organisational resources to achieve established organisational goals." First of all, management is a process or an ongoing interaction. If a snapshot of an organisation is taken, it just tells you where the organisation was at that time. However, by the time the photograph has been developed, the character of the organisation and what its managers are doing has already changed. Second, managers use all the resources of the organisation such as human, financial etc. People seem to be the most basic resource of any organisation, but managers should be using the other available organisational resources as well as human resources. For example, a manager who wants to increase production volume has to purchase modernised machinery as well as motivating the workforce, thus has to use both human and financial resources to attain the goal. Finally, the definition put an emphasis on achieving the organisation's established goals. Managers of any organisation try to attain specific ends. What makes an organisation different from another is its own unique set of goals. ...read more.

To get a clear definition of leadership, it could simply be said that leadership is a process whereby an individual influences a group of individuals to achieve a common goal. Some people were thought to have or possess leadership while others were regarded as lacking in this characteristic. About how to become a leader Bennis W. (1989) says "Billions of dollars are spent annually by and on would be leaders. Many major corporations offer leadership development courses. I would argue that more leaders have been made by accident, circumstance, sheer grit, or will than have been made by all the leadership courses put together. Leadership courses can only teach skills. They can not teach character or vision and indeed they do not even try. Developing character and vision is the way leaders invent themselves." Of interest to scholars throughout the 20th century especially after second world war, several studies were carried out by researchers. Some of significant leadership theories are Trait Approach, Style Approach and Situational Approach. In the second part of the essay, these theories are mentioned and analysed. The trait approach was one of the first systematic attempts to study leadership. Leadership traits have been studied to find out what made certain people great leaders (e.g., Thomas Jefferson, Abraham Lincoln and Mohandas Gandhi). So it began with an emphasis on identifying the qualities of great persons. Although the research on traits spanned the entire 20th century, a good overview of this approach is found in two surveys completed by Stodgill (1948, 1974). In his first survey, he identified a groups of important leadership traits that are related to how individuals in various groups became leaders. ...read more.

And a final criticism of the style approach is that it implies that the most effective leadership style is the high-high style. Even though some researchers (e.g., Blake & MacCanse, 1991; Misumi, 1985) have suggested that high-high managers are most effective, but that may not be the case in all situations. At this point in the development of research on the style approach, it remains unclear whether the high-high style is the most preferred style of leadership. One of the more widely recognised approaches to leadership is the situational approach, which was developed by Hersey and Blanchard (1969). As the name of approach implies, situational leadership focuses on leadership in situations. The basic idea of the theory is that different situations demand different kinds of leadership. The situational approach to leadership has several strengths, particularly for practitioners. Situational leadership is well known and frequently used for training leaders within organisations. Also, situational leadership is easy to understand, intuitively sensible, and easily applied in a variety of situations. Finally, situational leadership underlines the point that each subordinate must be treated differently based on the task at hand and to seek opportunities to help subordinates learn new skills and become more confident in their work. Despite its strengths, Situational leadership has sime limitations. There have been only a few research studies conducted to justify the assumptions and propositions set forth by the approach. Secondly authors of situational leadership do not explain the theoretical basis for these changes in the composition of each of the development levels. A final critisism of this approach is that the authors of the model do not make clear how "commitment" is combined with "competence" to form four distinct levels of development. (Level 1 : unwilling and unable, level 2 : willing and unable, level 3 : unwilling and able, level 4 : willing an able). ...read more.