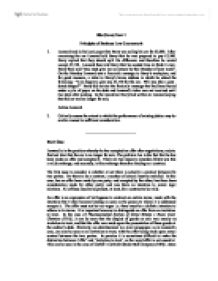 Critically assess the extent to which the performance of existing duties may be said to amount to sufficient consideration.

BSc (Hons) Year 1 Principles of Business Law Coursework 1. Lennard read in his local paper that Barry was selling his car for �2,000. After examining the car Lennard told Barry that he was prepared to pay �1,500. Barry replied that they should split the difference and therefore he would accept �1,750. Lennard then told Barry that he needed time to think it over. Barry then said "you must give me an answer by the Monday of next week". On the Monday Lennard sent a facsimile message to Barry's workplace, and for good measure, a letter to Barry's home address in which he stated the following: "I am happy to give you �1,750 for the car. Will you take a post-dated cheque?" Barry did not see the facsimile message that had been buried under a pile of paper on his desk and Lennard's letter was not received until two days after posting. In the meantime Barry had written to Lennard saying that the car was no longer for sale. Advise Lennard 2. Critically assess the extent to which the performance of existing duties may be said to amount to sufficient consideration. Part One Lennard is in the position whereby he has accepted an offer after negotiations, only to find out later that the car is no longer for sale. ...read more.

Proof of postage is required to make this fully binding. The operation of the principle is seen in the cases of K & R Adams v Lindsell (1818) and Household Fire Insurance Company v Grant (1879). In the former it was held that acceptance was made in the course of posting and was effective when posted. The latter reinforced this, adding that it is still true despite possible non-arrival. In the case of faxes, the communication rule applies in full in that acceptance is only binding upon the offeror receiving it, rather than upon it being sent. Lennard offered consideration in sending a fax and by posting a letter of acceptance. If a fax were the sole means of communication, then Lennard would not be able to sue, as the fax needed to have been received and read by Barry. In sending a letter Lennard ensured acceptance was communicated. It was effective upon him posting the letter. In the case of Lennard and Barry, Lennard would be advised to sue for breach of contract, which could result in a small claim. An invitation to treat was made in the advertisement in the newspaper. Lennard made an offer to Barry of �1,500. ...read more.

The promissory may also gain factual benefit, as damages may not fully compensate him for the loss that he would suffer should the duty be broken. Mr Justice Denning has said that the performance of an existing duty, or the promise to perform it, was of itself good consideration. This radical view has not been widely accepted, but the requisite of consideration has been mitigated by recognising that it can be satisfied where the promisee has conferred a factual (as opposed to legal) benefit on the promissory. The two sides of the debate as to whether the performance of existing duties may be said to amount to sufficient consideration, can be summarised by the two well known cases of Stilk v Myrick (1809) and Hartley v Ponsonby (1857). In the former there was insufficient consideration to make the captain's promise enforceable; whilst the latter expounds the fact that the depletion of the crew and the length of the journey was so great that the crew's existing contractual duties were discharged, and that them taking on a new set of duties amounted to sufficient consideration for the captain's promise of more pay. There is no straightforward conclusion to this argument, as in many other scopes of law. There is, however, significantly more validity and backing to the argument that expounds the view that the performance of existing duties does not amount to sufficient consideration. ...read more.