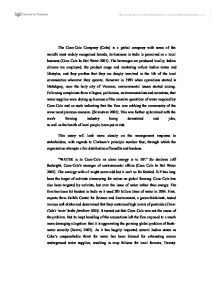 Critically evaluate the arguments for Corporate Social Responsibility and isolate whether you think it is a sensible business strategy. CSR Case Study - Coca Cola in India.

The Coca-Cola Company (Coke) is a global company with some of the world's most widely recognized brands, its business in India is perceived as a local business (Coca Cola In Hot Water 2005). The beverages are produced locally, Indian citizens are employed, the product range and marketing reflect Indian tastes and lifestyles, and they profess that they are deeply involved in the life of the local communities wherever they operate. However in 1993 when operations started in Mehdiganj, near the holy city of Varanasi, environmental issues started arising. Following complaints from villagers, politicians, environmentalists and scientists, that water supplies were drying up because of the massive quantities of water required by Coca-Cola and as such indicating that the firm was robbing the community of the areas most precious resource. (Srivastava 2006). This was further epitomized with the area's farming industry being devastated and jobs, as well as the health of local people, been put at risk. This essay will look more closely on the management response to stakeholders, with regards to Clarkson's principle number four; through which the organisation attempts a fair distribution of benefits and burdens. "WATER is to Coca-Cola as clean energy is to BP." So declares Jeff Seabright, Coca-Cola's manager of environmental affairs (Coca Cola In Hot Water 2005). The analogy with oil might seem odd but it isn't so far fetched. B.P has long been the target of activists clamouring for action on global farming. Coca-Cola has also been targeted by activists, but over the issue of water rather than energy. The firm has been hit hardest in India as it used 283 billion litres of water in 2004. First, experts from Delhi's Centre for Science and Environment, a green think-tank, tested various soft drinks and determined that they contained high levels of pesticide (Coca-Cola's 'toxic' India fertiliser 2003). It turned out that Coca-Cola was not the cause of the problem. ...read more.

There are incurred costs to being socially responsible, such as spending money on philanthropic activities within the community. The benefits of social responsibility might be hard to see at first, but over time, loyalty and commitment are created within the organization, among employees, with customers, and within the local community. CSR is especially important as technological advancement is rapidly affecting business practices. Many consumers spend money on the Internet as an alternative to leaving the home and shopping elsewhere. I would be hesitant to purchase items online that require credit card and personal information if the company did not have a good reputation within the community. I believe that if a firm is committed to society and their employees, the employees will return that commitment to the firm and society will embrace the business. To compete successfully, companies must do more than just produce the facts and financial statements at the end of the period. The consumers, employees, shareholders and even the general public demand quality products, superior services, sound ethical standards, sustainable management of resources and community interaction. Today's society requires businesses to be held accountable for their actions and to be more transparent instead of withholding information. (World's Most Respected Companies 1998) When a community sees a business actively participating in community functions, using ethical practices, minimizing environmental impact, or working with charities, brand confidence increases. It is possible that a business might adopt CSR practices out of self-interests to pursue societal rewards as well as imitate the success of others. Many firms only begin using CSR practices after negative press surfaces. Coca-Cola in India created a CSR advisory board after negative press over fatal gas leaks and contaminated water. In other words, some companies only use CSR as a publicity tool to cover up problems that were apparent within an organization. In the same way that Coca-Cola used CSR to strengthen risk management, fast food restaurants are now offering "carb-conscious" alternatives to their otherwise unhealthy products. ...read more.

Furthermore, pushing business practice from ethical responsibility into the higher realm of discretionary responsibility is proven not only beneficial for society, but profitable for business as well. This is shown in the example of Timberland, Co. Friedman's motto "the business of business is business" can become counterproductive as it may cause managers to focus excessively on short-term performance, thus neglecting the broader issues and opportunities, such as societal trends, trust of customers, investments into innovation and other growth prospects that will solidify company success long-term. However, I support the opposing notion that when CSR increases cost and reduces profit, it is not a viable business strategy. For Levi Strauss, the consequences of the excessive and costly actions of Bob Haas show the dangers of taking CSR too far. Companies also have ethical obligation to be wise stewards of money invested by shareholders, and to be accountable for financial decisions. I agree with Friedman and Kerr that social goals which compromise a company's profitability are indeed disadvantageous and detrimental to social welfare in the long run. In conclusion, there are valid arguments supporting and opposing Corporate Social Responsibility. CSR can enhance a company's reputation and brand name, promote transparency and integrity, evoke employee loyalty and expose market opportunities while simultaneously benefiting society. On the other hand, its disadvantages include increased costs, ethical issues regarding the use of shareholder capital, variation in the interests of the public in different contexts and the fact that environmental and social contribution is difficult to measure and account for. The concerns of critics such as Milton Freidman and Roger Kerr can be partnered with those contrasting ideas of advocates such as Dick Hubbard to create a Corporate Social Responsibility Strategy that is sensible and justifiable. I believe businesses should balance their principle objectives with the broader interests of the societies of which they are a part. I support the sensible and careful execution of CSR whereby accountability and wise stewardship are an integral part. Incorporating these values make CSR a sensible corporate strategy, beneficial for both business and society. ...read more.