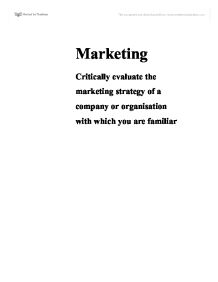 Critically evaluate the marketing strategy of a company or organisation with which you are familiar.

Marketing Critically evaluate the marketing strategy of a company or organisation with which you are familiar Bibliography 1 Business Review Volume 4 September 1997 2 Letts A-Level Business Study Guide 3 The book of Marketing Michael J. Baker 4 A-Z Business Dictionary Ian Marcouse 5 Business Studies Second Edition Hall, Jones & Raffo 7 www.manutd.comBefore providing the answer to the above question, one must clearly define marketing, what it involves and why so many businesses create marketing strategies to achieve their corporate aims and objectives. Marketing has been described as an art, a science, a myth or indeed a combination of all three. It is a function that is subject to much criticism, due to the creation of wants and the persuasion techniques used; yet it is a function, which the country depends on for the export of goods and to fight competition from imports. It is also a function clouded by some confusion, the most common confusion arises between a marketing and a selling orientated business. The following is a quote by Theodore Levitt: "Selling focuses on the needs of the seller in converting his product into cash." "Marketing focuses on the needs of the consumer." The above quotes can be viewed as being very broadly defined and thus vague. ...read more.

The company's marketing strategy is very successful as will be discussed. Over the last 15 years, Manchester Utd have had a key marketing opportunity due to their success as a football team and subsequently the amount of interest that people have in them. A marketing opportunity occurs when a particular thing happens which enables a firm to aim products at a certain segment of the market. An example is the clothes brand NY. Its sales have rose dramatically sine the terrifying disaster that happened on September 11th. Celebrities started to wear the brand, which stands for New York as a mark of respect. Subsequently the demand for the brand increased dramatically. Although less tragic, this is the case for Manchester United PLC. Another factor is the high publicity of their mid-fielder David Beckham. This has meant that a lot of merchandise has been sold with him on it. Recently, in his newly formed contract, he was told that he had to keep the same hairstyle for at least 6 months, so as not to pre date the merchandise. The club has also continued to develop the Old Trafford stadium. This costs an outstanding some of money and the club persist that it is to accommodate more of their supporters. ...read more.

Recently, having visited Old Trafford, in the official supporters shop there was a deal for Manchester United fans. With the stub of a match ticket, you could purchase a vodafone handset for 75% of the retail price. This is another perk for the club's supporters. It is evident that Manchester United PLC has a clearly defined marketing mix. It is more that visible that the company is successful, mainly due to the fact that it is the richest club globally. The club had an intake of over �100m in 1999, the year they completed the historic treble. This alone would tell you that the clubs marketing strategy is very strong, and that is a clear incentive for the club to perform well on the field. On a way of conclusion, one can clearly see the marketing strategy of Manchester United PLC and how it is exercised. This strategy has lead to great success, both on and off the field. Being the richest club in the world, the finance for buying world-class players is certainly available. This, with help from the management staff at the club, would improve the team, and therefore, create greater publicity for the club and also help attract new fans, which in turn helps sales of company merchandise. Both the club and company as a whole benefit from each other and this link will remain strong both keep doing what they are doing best. Performing well. ...read more.