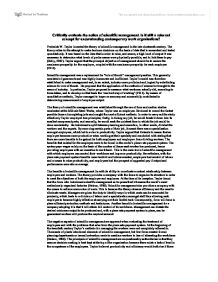 Critically evaluate the notion of scientific management. Is it still a relevant concept for understanding contemporary work organisations?

Critically evaluate the notion of scientific management. Is it still a relevant concept for understanding contemporary work organisations? Frederick W. Taylor invented the theory of scientific management in the late nineteenth century. The theory refers to the attempt to make business decisions on the basis of data that is researched and tested quantitatively. It was based on the idea that in order to raise, and secure, a high level of output it was necessary to determine what levels of performance were physically possible, and to link these to pay (Kelly, 1982). Taylor argued that the principal objective of management should be to secure the maximum prosperity for the employer, coupled with the maximum prosperity for each employee (1911). Scientific management was a replacement for "rule of thumb" management practice. This generally consisted of guesswork and was highly inaccurate and inefficient. Taylor's model was therefore established to make management and, to an extent, industry more proficient and logical by substituting science for rule of thumb. He proposed that the application of the methods of science be brought to the arena of industry. In particular, Taylor proposed to measure what workmen actually did, according to times taken, and to develop on that basis the 'one best way of working' (1911). By means of quantitative methods, Taylor managed to improve accuracy and successfully contributed to determining measurement of employee output. ...read more.

Workers are driven by financial motivation; being given a consolation of high wages while employers maintain control over the workforce. The antithesis of scientific management is the human relations movement established by Elton Mayo. The model is based on the research undertaken by Mayo at the Hawthorne electrical components factory between 1927 and 1932. Mayo followed Taylor's methods and was attempting to measure the impact on productivity of improving the lighting conditions within the factory. He followed Taylor's scientific principles by testing the changes against a control, a section of the factory with unchanged lighting. Although productivity rose where the lighting was improved, Mayo was surprised to find a similar benefit where no physical changes had taken place. This led him to conduct further experiments, which cast doubts on Taylor's assumptions about the importance of money in motivation (Marcouse, 1996). Mayo's work brought forward an alternative to Taylor's methods of controlling the workforce; studies suggested that scientific management could not explain key aspects of people's behaviour at work, specifically within work groups. Instead Mayo found that employees whose social needs were being fulfilled produced above average levels of output, as it acted as a source of empowerment. There are many benefits of the human relations movement. It suggests a company should organise the social needs of the workforce and stresses that the role of management is to provide organisational environments in which employers can fulfil the social needs of their employees thus encouraging employees' desire for co-operative activity (Fincham & Rhodes, 1999). ...read more.

In his research Ritzer asserts that the business principles pioneered by McDonalds are increasingly dominating other industries and activities (Fincham & Rhodes, 1999). The underlying theme of his work is that particular aspects of scientific management have been adapted to contemporary business organisations in order to help management find the most cost effective and rational production technique thus leading to an increase in productivity. Tenets that are taken from Taylor's model include the division of labour, where there is a split between planning and execution, specialisation, when workers are highly efficient in their specified task, and time and motion studies, which includes timing the job in order to find the most efficient method. Despite the adopted principles from scientific management, McDonaldisation also contains aspects of the human relations movement. For example, if output is above average the employee responsible will usually be praised and singled out. By doing so, management fulfils their social and psychological needs. This can affect the culture of an organisation as it means that employees are motivated by self-actualisation and not exclusively by financial incentives. The above example proves that the theory of scientific management is compatible in understanding contemporary work organisations. Taylor's recommendations have become standard practice around the world and have certainly been adopted throughout the manufacturing industry and increasingly in the services sector. Taylor himself prophesised "that these principles are certain to come into general use practically throughout the civilised world, sooner or later... and the sooner they come the better for all the people" (1911). ...read more.