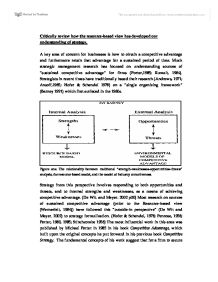 Critically review how the resource-based view has developed our understanding of strategy.

Critically review how the resource-based view has developed our understanding of strategy. A key area of concern for businesses is how to obtain a competitive advantage and furthermore retain that advantage for a sustained period of time. Much strategic management research has focused on understanding sources of "sustained competitive advantage" for firms (Porter,1985; Rumelt, 1984). Strategists in recent times have traditionally based their research (Andrews, 1971; Ansoff,1965; Hofer & Schendel 1978) on a "single organizing framework" (Barney 1991) which first surfaced in the 1960s. Figure one. The relationship between traditional "strength-weaknesses-opportunities-threats" analysis, the resource based model, and the model of industry attractiveness. Strategy from this perspective involves responding to both opportunities and threats, and to internal strengths and weaknesses, as a means of achieving competitive advantage. (De Wit. and Meyer. 2002 p30) Most research on sources of sustained competitive advantage (prior to the Resource-based view (Wernerfelt, 1984)) have followed this "outside-in perspective" (De Wit and Meyer. 2002) to strategy formulization. (Hofer & Schendel, 1978; Penrose, 1958; Porter, 1980, 1985; Stinchcombe 1956) The most influential work in this area was published by Michael Porter in 1985 in his book Competitive Advantage, which built upon the original concepts he put forward in his previous book Competitive Strategy. The fundamental concepts of his work suggest that for a firm to secure sustained competitive advantage, they must first select a market with attractive characteristics. ...read more.

Moreover, if these resources are also simultaneously not imitable (replicated), not substitutable and not transferable, those resources may generate a competitive advantage that is sustainable.(Barney 1991.In Briem and Butler. 2001). Since the publication of Barneys Resource-based model, many scholars have questioned the apparent link, suggested by Barney, between internal resources and sustained competitive advantage. AREAS OF DEBATE So what has fuelled this fiery debate? Well, essentially the RBV has been a popular and well accepted among strategists. However, it does have some critics, in particular Richard Priem and John Butler. They have shown concern regarding the lack of critical evaluation of the RBV, in terms of its theory status, and also its potential contribution to the field of strategic management. They only refer to two studies that have considered these issues; one published by Ryall in 1998 and the other by McWilliams and Smart in 1995 respectively. Priem and Butlers' article aims to provide a more rigorous critique and clarification of the RBV by addressing two elemental questions. (1) Is the RBV actually theory? (2) Is the RBV likely to be useful for building understanding in strategic management? The "degree to which the RBV is likely to enrich strategy research depends, in part on the extent to which it becomes a theory of competitive advantage" (Briem and Butler 2001 p25). ...read more.

Further investigation in this area can only be beneficial to our understanding of strategy. I believe the debates generated by the publication of the RBV have highlighted some key issues about theory status and the use of simplifying assumptions. In particularly that "practicing strategist do not have the luxury of ceteris paribus assumptions that all aspects of strategic situations remain equal". (Priem and Butler. 2001p31). The publication of the RBV has lead to a selection of studies which are trying to combine and strengthen out understanding of internal and external analysis (Brush and Artz 1999, Miller and Shamine 1996. In Briem and Butler 2001). Future research needs to be equally balanced without unrealistic simplifying assumptions. Whether future research of this type is too complex to obtain theory status is yet to be seen, however I suggest that comprehensive evenly balanced model would benefit our understanding further. In summary, the RBV (Barney 1991) has benefited our understanding of strategy as it has given rise to much debate in the area of internal resources and their associated values and link to competitive advantage. It will be interesting to see how further research attempts to deal with the shortfalls of the RBV and Porters (1979) five forces theory. Already, there are many studies taking a more dynamic approach, as the original RBV was intended. It will be interesting to see if these can be link with important environmental influences as well. ...read more.