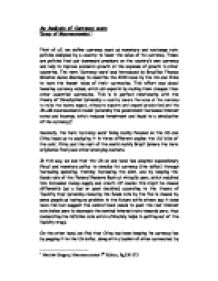 Currency_Wars. we define currency wars as monetary and exchange rate policies designed by a country to lower the value of its currency.

An Analysis of Currency wars 'Essay of Macroeconomics'; First of all, we define currency wars as monetary and exchange rate policies designed by a country to lower the value of its currency. These are policies that put downward pressure on the country's own currency and help to improve economic growth at the expense of growth in other countries. The term 'Currency wars' was introduced by Brazilian Finance Minister Guido Mantega to describe the 2010 move by the US and China to have the lowest value of their currencies. This effort was about lowering currency values, which aid exports by making them cheaper than other countries' currencies. This is in perfect relationship with the theory of 'Devaluation' (whereby a country lowers the value of the currency to raise the money supply, stimulate exports and expand production) and the IS-LM macroeconomic model (whereby the government increases interest rates and incomes, which reduces investment and leads to a devaluation of the currency)1. Secondly, the term 'currency wars' being mainly focused on the US and China leads us to analyzing it in three different angles: the US 'side of the coin', China and the rest of the world mainly Brazil (where the term originates from) and other emerging markets. In this way, we see that the US on one hand has adopted expansionary fiscal and monetary policy to devalue its currency (the dollar) through increasing spending; thereby increasing the debt, and by keeping the funds rate of the Federal Reserve Bank at virtually zero, which resulted into increased money supply and credit. ...read more.

From the US side: In the G20 of November 2008, the US advanced its vision for a kind of global bargain, under the name "rebalancing". GDP grew to approximately $14.9 in early 2011 and the components were consumption 71%, investment 12%, government spending 20% and net exports -3%. Still this was above what the economy had before the recession in 2007, even though the economy wasn't growing enough to carb unemployment from the high level reached in early 2009. The remedy for this problem was to come from the consumer. Government spending and investment was also to play a role but the consumer had to so at 70% or more of GDP. To get the economy moving, a combination of low interest rates, easier mortgage terms, wealth effects from rising stock market and credit card debt had to be used to get the economy back to normal again. What came out was that the consumer was highly leveraged and many Americans owed more on the mortgages than ever before. The consumer was really in trouble with high unemployment, retirement looming and children's college bills coming due in a state of desperation wasn't easy for many. Investment later on could also not work properly without the consumer playing his role. To reverse the situation, the US increased government spending but after four stimulant plans from 2008 to 2010 without creating new jobs, a revolution to make new government spending was made. Later on the Obama administration decided to keep consumption, investment and government spending out of play by increasing net exports. ...read more.

Until 2006, 66% of the world's central bank reserves and more than 43% of all cross border transactions were in dollars and most oil contracts were written in dollars. Apart from the dollar, there's the Euro with only 25% of central bank reserves and 39% of cross border transactions in the same year. However, the problems still emerge from these country currencies because the dollar has problems (such as with the Yuan) and even the euro has recently reduced in trust due to different financial crisis in its country members. Therefore, China and Russia in March 2009, suggested that the world develops a single currency that would be disconnected from the individual nations and could maintain its stability in the long run while removing deficiencies caused by credit-based national currencies. China is worried because of its $ 2 trillion holdings in US $ which might become useless due to continued increase in US deficit spending and printing of US treasuries to support US debt. So, who would be responsible for creating such a currency? China says it's the IMF that has the ability to develop a currency to replace the US dollar as a world currency. Represented by Tim Geithner, the US said it would support the idea even though later on US president Barack Obama said he supports a strong dollar (therefore not buying the idea)11. 1 Mankiw Gregory, Macroeconomics 7th Edition; Pg.350-373 2 www.imf.org; www.theworldbank.org 3 www.guardian.co.uk; Thursday 3, 2011 10.37 GMT 4 http://www.brookings.edu/reports/2011/0408_blep_cardenas.aspx 5 http://www.bbc.co.uk/news/business-11484532 6 James Richards: Currency wars, The making of the next global crisis, Pg.79-89 7 Uri Dudush and Vera Eidelman, Currency Wars, Pg.30 8 http://www.project-syndicate.org/commentary/stiglitz124/English 9 http://www.tradingeconomics.com/current-account-to-gdp-list-by-country?c=major 10 http://voxeu.org/index.php?q=node/6698 11 http://gulfnews.com/business/economy/china-calls-for-stable-global-reserve-currency-1.848307 ?? ?? ?? ?? ...read more.