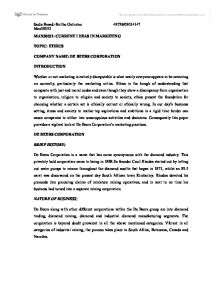 MAN30032: CURRENT I DEAS IN MARKETING TOPIC: ETHICS COMPANY NAME: DE BEERS CORPORATION INTRODUCTION Whether or not marketing is entirely disreputable is what nearly everyone appears to be centering on currently, particularly the marketing critics. Ethics is the bough of understanding that compacts with just and moral codes and even though they show a discrepancy from organization to organization, religion to religion and society to society, ethics present the foundation for choosing whether a certain act is ethically correct or ethically wrong. In our day's business setting, stress and anxiety to realize top aspirations and ambitions in a rigid time border can cause companies to slither into unscrupulous activities and decisions. Consequently this paper provides a vigilant look at De Beers Corporation's marketing practices. DE BEERS CORPORATION BRIEF HISTORY; De Beers Corporation is a name that has come synonymous with the diamond industry. This privately held corporation came to being in 1888.Its founder Cecil Rhodes started out by letting out water pumps to miners throughout the diamond scuttle that began in 1871, whilst an 83.5 carat was discovered on the present day South African town Kimberley. Rhodes devoted his proceeds into procuring claims of miniature mining operatives, and in next to no time his business had turned into a separate mining corporation. NATURE OF BUSINESS; De Beers along with other different corporations within the De Beers group are into diamond trading, diamond mining, diamond and industrial diamond manufacturing segments. The corporation is beyond doubt prevalent in all the above mentioned categories. Vibrant in all categories of industrial mining, the process takes place in South Africa, Botswana, Canada and Namibia. MARKETING STRATEGIES; The success behind De beers its in due part to the company's effective marketing of diamonds as a token of love. DE BEERS SWOT ANAYLISIS; SWOT analysis is a means of assessing a business or an organization together with its environment. This involves monitoring the internal and external marketing environment of a business. ...read more.

Many of these "migrant workers" became subjected to very appalling living conditions and in the DeBeers Company stores for many years were all the time thought of thieving diamonds, and for a meal they were fed with a little bread and cold tea during working hours. THE VIGOROUS REMOVAL OF BASARWA FROM THEIR NATIVE LAND; "I cannot be told by anyone how to live. If I said to the minister, move from your home he would think I was mad."(survivalinternational.org). These are the words of a bushman from Botswana on the Bushmen's relocation from The Central Kalahari Game Reserve also known as CKGR. De Beers through a joint venture with the government of Botswana controls the country's diamond mining. Botswana government holds 50% of the company (Debswana)'s shares with the remaining 50% owned by the De Beers Corporation. A lengthy heated debate has subsisted involving De Beer's mining interest, Debswana and the relocation of the country's Bushmen from their inhabitant land in order to make the most of the diamond sources. Ever since as early as the 1980's when the diamond sources were ascertained, the Bushmen are reported to have been fronted with threats from the Botswana government policies. As a way of trying to get them to evacuate, the Bushmen have been fined for practicing their 'superseded' hunting and gathering way of life, they have been agonized and beaten and their water supply brought to a halt. In order to counteract and bring to an end to what it calls genocide of an African clan, Survival International along with Iman and other numerous international supermodels that were in the past engaged in the company's diamonds advertising are fighting hard against the move. Iman has profoundly criticized and cut ties with the De Beers Corporation over a difference of ethics. She was quoted in one interview as saying; 'it was clear that the Bushmen were being destroyed - you take people from their element and you end up with Aids, drugs and alcohol in the guise of advancement.' ...read more.

Iman also in pulling out from De Beers took a bold move no ordinary person would have taken especially in this greed ridden era where money and all the other worldly materials matter. Apart from all of the above consumers can come together and call for a boycott of products of and protests against the irresponsible and unethical companies. TRUTH OR JUST MERE ALLEGATIONS? Like the saying goes, where there is smoke there is fire; this a suggestion that all the tittle-tattles and allegations are often validated by fact. Given a number of the ethical issues discussed at the beginning of this paper, De Beers is by far one of the most unethical corporations one has ever come upon. While there is some element of decency in its practices, like for example, addressing the issues of sustainability and it being shaped by the societal essentials of the countries in which it operates as mentioned in its website, the bad just seem to supersede the good. The corporation has failed to balance its interest with those of consumers. In her book, Business Ethics: the new bottom line, Carmichael writes that doing the right doesn't need any excuses or justification. She further explicates how acting ethical can feed through the bottom line and help corporations improve customer relations, employee relations, supplier relations etc. Of course every Jack and Jill knows that businesses need to make profits in order to survive, if nonetheless those profits and survival are realized through delinquency the benefits are short lived. But of course, regrettably, society today is fuelled by voracity, money and power. People and businesses have grown to be egotistical and selfish and will carry on sucking up everything and whatever thing around them until there is just nothing remaining. In conclusion, by its character, the issue of ethics is divisive an there is no particular approach that is universally recognized for dealing with ethical issues (Ferell, Fraedrich) however acting in an ethical manner saves corporations a lot of billions in lawsuit settlements etc (Weiss, pp 11). ...read more.