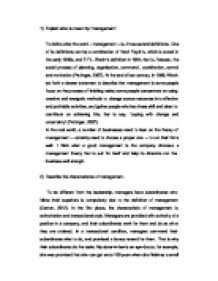 1) Explain what is meant by 'management'. To define what the word - management -- is, it has several definitions. One of its definitions can be a combination of Henri Fayol's, which is stated in the early 1990s, and E.F.L. Brech's definition in 1984, that is, forecast, the social process of planning, organisation, command, coordination, control and motivation (Pettinger, 2007). At the end of last century, in 1996, Winch set forth a clearer statement to describe that management is some people focus on the process of finishing tasks; some people concentrate on using creative and energetic methods to change scarce resources into effective and profitable activities, and gather people who has these skill and talent to contribute on achieving this, that is say, 'coping with change and uncertainty' (Pettinger, 2007). In the real world, a number of businesses need to lean on the theory of management -- certainly need to choose a proper one -- to run their firms well. ...read more.

3) Recognise the three levels of management and list the functions of management. A hierarchy describes the structure of the management of a business; it shows the number of different management levels from the highest of a company to the lowest rank. At the meantime, it shows which levels of management and employees should respect to whom. In general, management could be distributed into three levels, directors, managers, and general staff (Hall, et al, 2008). Directors are responsible for running the company in the interest of themselves of their shareholders. They are in overall charge of an organisation; they meet persons such as the Board of Directors to make major decisions when it is necessary. Managers focus on controlling or organising within the company. Usually, they make day-to-day decisions. General staff report to their certain superiors, depending on which department they belong to (Hall, et al, 2008). A French management theorist who had listed 'planning, organising, commanding, co-ordinating, and controlling' as functions of management in 1916 is Henri Fayol (Hall, et al, 2008). ...read more.

Henri Fayol (1841-1925) defined a 14 'principles of management' which is followed his emphasis 'command and control' strictly. They are: (Robinson, 2005) 1. Division of work. It requires specialisation, repetition, leading to speed and accuracy. 2. Authority and responsibility. Increasing judgement and morality at top levels are required in these conditions. 3. Discipline, which means obedience, application and respect. 4. Unity of command. It means only one senior-level manager can command orders to workers. Besides these four points, the rest ten points are: fair but not excessive wages, unity of direction, centralisation, subordination of individual interests to the general good, and the scalar chain, equity, stability, order, initiative and sprite de corps (Robinson, 2005). Nowadays, this method could be evident in every McDonald's in the world. Chips are cooked at a certain degree for exactly minutes, and then a timer tells staff to take them out and slat them. In spite of every McDonald's is a set of dedicated, purpose-built machines for producing ice-creams, toasting buns, cooking chips and much else. However, Taylor's theory does work on car industry, army and some chain businesses, and workers could feel very much at home or at work ordering a McDonald's hamburger. ...read more.