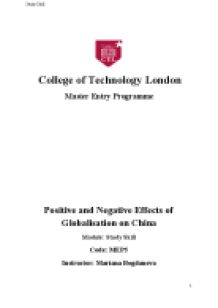 Describe the Positive and Negative Effects of Globalisation on China

﻿Study Skill College of Technology London Master Entry Programme Positive and Negative Effects of Globalisation on China Module: Study Skill Code: MEP5 Instructor: Mariana Bogdanova Submitted By: Ramesh Neupane CTL ID: 105724-77 Part 1 Essay The Positive and Negative Effects of Globalisation on China Introduction The combination method of local economics, civilisation and sophistication through the worldwide system of communication, transportation and trade is known as globalisation. The combination of the local economy to the foreign economy through different activities such as international trade, investment, international migration and the expansion of new innovation which are related to economic globalisation. It is commonly known as the integration of local economy, new technology, the tradition of the people and political factors to the foreign countries. Globalisation has influenced the different countries depending on their level of achievement and their expose to the movement of the global economy (Milward, 2003). Globalisation is a multi-dimensional process approach from view-point of the distinct disciplines. Economists give emphasis on the increase of global trade, flow of international capital and the liberal governance of the international companies. Political scientists observe globalisation as a procedure which tends to demoralise the nation and rise of the new government. Similarly, socialists inspect globalisation as the spread of a multi-culture and the supervision of the mass-media by large firms (Wall et al., 2010). However, it is the process of becoming the whole world into the single market. Moreover, the goods and service, capital and manpower are taken from the whole world. China will be the next economic supreme power. Many economists predicted that in some years China will counterpart the Japanese and US economy. China is success to take the advantages of raised globalisation to extend its fast growth of economy and development. (Yao & Yueh, 2006). China has also experienced the difficulties of economic integration. Because of the economic integration, China got the achievement of being the next supreme economic power. ...read more.

Because of lack of privatisation, Chinese firms are unable to take part on the ?global-level playing field?. Furthermore, there is competitive struggle between firms and customers in the market level and also no perfect competition between small firms but competition between large and oligopolistic firms. China is aware about the future of regional cooperation for recovering the risk-opposition capability. Developing countries are facing the problem from the weak economic condition and it is difficult to resist the risk of globalisation. So, increasing the power of regional financial cooperation, they can get benefit from this. In the present context, regional and sub-regional cooperation such as South Asian Association for Regional Cooperation (SAARC); are growing day after day. In this situation, China has also signed The Framework Agreement of ?Association of Southeast Asian Nations? (ASEAN) on 4th November 2002 with viewing on the establishment of free trade zone with the eleven countries of south east Asia by 2010 (Dr. Chen, J. 2003). After that, China has made its own unique policy and achieved a good progress in different fields. According to the World Bank?s report on China Quarterly Update 2010, China?s economic growth is rapidly growing during the global crisis periods also. The growth is 9.6% in the third quarter of 2010. The export part is very strong and the domestic demand is also very high. Conversely, the import is slow down and the external surplus is rising. On the other hand, there is an impact on cultural convergence by the globalisation. One of the reasons of globalisation of trade is cultural convergence also. The advanced communication system and rising of international travelling have guided to increasing uniformity of overseas market. Similarly, the advanced technology increased the extent of global media and decreased the cost of communication for Chinese people. As a result, their tests were conversing and create the global market for standard product. The changing of daily lifestyle and following the western culture are the main impact on Culture. ...read more.