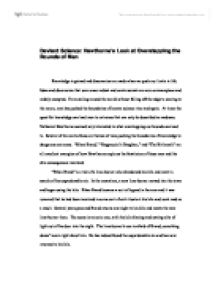 Deviant Science: Hawthorne&amp;#146;s Look at Overstepping the Bounds of Man

Deviant Science: Hawthorne's Look at Overstepping the Bounds of Man Knowledge is gained and discoveries are made when we push our limits in life. Ideas and discoveries that were once radical and controversial are now commonplace and widely accepted. From sailing around the world without falling off the edge to soaring to the moon, man has pushed the boundaries of known science time and again. At times the quest for knowledge can lead men to extremes that can only be described as madness. Nathaniel Hawthorne seemed very interested in what overstepping our bounds can lead to. Several of his works focus on themes of man pushing his boundaries of knowledge to dangerous extremes. "Ethan Brand," "Rappaccini's Daughter," and "The Birthmark" are all excellent examples of how Hawthorne explores the fanaticism of these men and the dire consequences involved. "Ethan Brand" is a tale of a lime-burner who abandoned his kiln and went in search of the unpardonable sin. In the meantime, a new lime-burner moved into the town and began using the kiln. Ethan Brand became a sort of legend in the area and it was rumored that he had been involved in some sort of evil rituals at his kiln and went mad as a result. ...read more.

All of this is observed by Giovanni Guasconti, a young man staying in an apartment with a view of the garden. Inquiring about Rappaccini, we learn that he is much like Ethan Brand. "He cares infinitely more for science than for mankind. His patients are interesting to him only as subjects for some new experiment. He would sacrifice human life, his own among the rest, or whatever else was dearest to him, for the sake of adding so much as a grain of mustard-seed to the heap of his accumulated knowledge" (394). Hawthorne is again using the relentless pursuit of knowledge to represent the most evil of sins. Rappaccini's daughter is a creation of his garden, so much a part of it that she may not ever be able to leave even if she wanted to. The poisons that he has created in the garden in the name of medicine have become part of her. Restricting her to the garden in this way was his first sin against her. At the end of the story, when she drinks a formula to try to rid herself of the poison she dies. She is in love with Guasconti and is tormented by not being able to touch him or ever leave. ...read more.

He has caused her so much pain by hating it that she insists he use his science to remove it, whatever the cost. "And, Aylmer, spare me not, though you should find the birth-mark take refuge in my heart at last" (264). Georgiana's mark indeed does go straight to her heart, and nothing Aylmer tries will remove it, forcing him to try more and more powerful treatments until she dies from the treatment. Aylmer's disgust for the birth-mark led to the most terrible of circumstances. He caused Georgiana to hate the mark so much that she wanted to die rather than live with it any longer. Rappaccini imprisoned his daughter and caused her death in the name of medicinal knowledge. Ethan Brand forsook mankind to know what the unpardonable sin is, and Hawthorne addresses it in each of these stories. Man pushing his boundaries to the point where mankind no longer matters and knowledge is of the utmost importance is Hawthorne's unpardonable sin. When, in the quest for knowledge, man steps out of his bounds, terrible things happen. Of these three, none realized what the point of science was and lost touch with their humanity because of it. Hawthorne states it best at the end of "The Birth-mark." "The momentary circumstance was too strong for him; he failed to look beyond the shadowy scope of Time, and living once for all in Eternity, to find the perfect Future in the present" (278). ...read more.