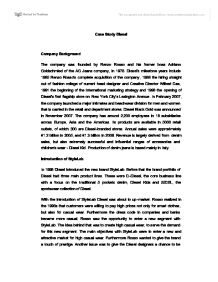 Case Study Diesel Company Background The company was founded by Renzo Rosso and his former boss Adriano Goldschmied of the AG Jeans company, in 1978. Diesel's milestone years include 1985 Renzo Rosso's complete acquisition of the company, 1988 the hiring straight out of fashion college of current head designer and Creative Director Wilbert Das, 1991 the beginning of the international marketing strategy and 1996 the opening of Diesel's first flagship store on New York City's Lexington Avenue. In February 2007, the company launched a major intimates and beachwear division for men and women that is carried in the retail and department stores. Diesel Black Gold was announced in November 2007. ...read more.

Rosso realized in the 1990s that customers were willing to pay high prices not only for smart clothes, but also for casual wear. Furthermore the dress code in companies and banks became more casual. Rosso saw the opportunity to enter a new segment with StyleLab. The idea behind that was to create high casual wear, to serve the demand for this new segment. The main objectives with StyleLab were to enter a new and attractive market for high casual wear. Furthermore Rosso wanted to give the brand a touch of prestige. Another issue was to give the Diesel designers a chance to be creative, to work with new materials and experiment with new fabrics and cuts. ...read more.

If you take a closer look at the development of the brand Diesel you can notice that Diesel remained true to its original identity despite of its growth. The original identity of Diesel was rebellious, uncommon and a sense of humour. The problem Diesel had was a constant threat of losing originality. Diesel became a victim of its success, Diesel started to become conventional due to the evolution of the market. To counteract to that Diesel invented labels like StyleLab, the idea behind that was to crate upper range jeans, to generate new consumers and to enter a new market. However Diesel always stayed true to its roots and linked new brands with the original brand and kept links to the original image. By doing that Diesel never lost its credibility. ...read more.