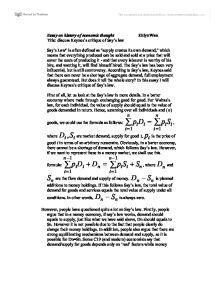 Essay on history of economic thought ZhiyuWan Title: discuss Keynes's critique of Say's law Say's Law" is often defined as "supply creates its own demand," which means that everything produced can be sold and sold at a price that will cover the costs of producing it - and that every labourer is worthy of his hire, and wanting it, will find himself hired. The Say's law has been very influential, but is still controversy. According to Say's law, Keynes said that there can never be a shortage of aggregate demand, full employment always guaranteed. But does it tell the whole story? In this essay I will discuss Keynes's critique of Say's law. First of all, let us look at the Say's law in more details. In a barter economy where trade through exchanging good for good. For Walras's law, for each individual, the value of supply should equal to the value of goods demanded in return. ...read more.

Some C19 (and modern) economists say that demand/supply for goods depends only on 'real' factors while money only affects nominal price level. This implies Say's identity. Some also argue that this just cannot be true because monetary change can only affect price level via demand and supply for goods. is not always zero. For example, when people have too much cash they spend or lend it, as a result, this raises price level. Secondly, people try to explain the invalidity of say's law from another side. If demand equals to supply, the reflection to individuals should be that their wages should equals to the value of output. Obviously, this cannot be true because the value of output is more than their wage bill. Otherwise not a single firm could possibly make any profit. So workers' spending won't account for all of output. People just can not formulated a clear answer to this. At the same time, some people mentioned that another important issue: investment. ...read more.

Full-employment equilibrium itself is unnatural for Keynes. He later stated that Full employment "can only exist when, by accident or design, current investment provides an amount of demand just equal to the excess of the aggregate supply price of the output resulting from full employment over what the community will choose to spend on consumption when it is fully employed. John Stuart Mill started his argument by saying saving is consumed by productive workers, Consumption takes place to the greatest extent which production admits of. Because in a barter economy, No overall shortage of demand is possible, so Say's law might hold. In money economy sell for money first, spend money later. Mill agrees that all income spent or invested, but not necessarily immediately. For instance, in a stagnation period, people might delay their purchasing, demand falls, in a economy boom, everything will be sold quicker, and money will be spent hurry. So the main stimulus are to spending is raising prices. When general price level rises but people don't realize it (they think their own prices are rising) expand output, reinvest immediately. ...read more.