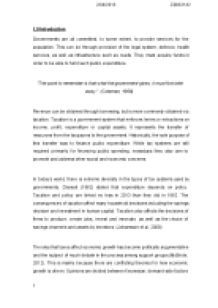 Discuss the assertion that the sole purpose of the tax system is to promote economic growth. Illustrate your answer with reference to examples from British and American tax policy over the last ten years

﻿22/4/2013 Z0932142 1.0 Introduction Governments are all committed, to some extent, to provide services for the population. This can be through provision of the legal system, defence, health services, as well as infrastructure such as roads. They must acquire funds in order to be able to fund such public expenditure. "The point to remember is that what the government gives, it must first take away." (Coleman, 1956) Revenue can be obtained through borrowing, but is more commonly obtained via taxation. Taxation is a government system that enforces levies or extractions on income, profit, expenditure or capital assets. It represents the transfer of resources from the taxpayers to the government. Historically, the sole purpose of this transfer was to finance public expenditure. While tax systems are still required primarily for financing public spending, nowadays they also aim to promote and address other social and economic concerns. In today?s world, there is extreme diversity in the types of tax systems used by governments. Disreali (1862) stated that expenditure depends on policy. Taxation and policy are linked no less in 2013 than they did in 1862. The consequences of taxation affect many household decisions including the savings decision and investment in human capital. Taxation also affects the decisions of firms to produce, create jobs, invest and innovate, as well as the choice of savings channels and assets by investors. (Johansson et al, 2008) The idea that taxes affect economic growth has become politically argumentative and the subject of much debate in the process among support groups (McBride, 2012). This is mainly because there are conflicting theories for how economic growth is driven. Opinions are divided between Keynesian, demand-side factors and Neo-classical, supply-side factors. McBride?s report quotes, ??the economy is sufficiently complex that virtually any theory can find some support in the data?, explaining why the historical facts and figures are still unable to shed light on the issue. ...read more.

Changes in income tax have been to cut the number of tax rates, cut the basic and higher rates of tax and different rules for taxing of couples independently. In 2003, George W. Bush stimulated a tax reform in the US that reduced the marginal tax rate on the highest incomes from 39.6% to 35%. The result was a decline of income taxes from 10.3% of GDP in 2000 to 7.0% of GDP in 2004 (Piketty and Saez, 2007). There are several reasons why fiscal neutrality has been desirable for governments. Fiscal neutrality coincides with economic efficiency, reducing administrative costs associated with taxation. Reducing income tax also gives consumers a relatively higher income, increasing consumer confidence and therefore productivity. This is supported by Johansson et al.’s study that finds a reduction in the top marginal income rates raises productivity in industries with potentially high enterprise creation. Following Bush’s policy expiration this year, Barack Obama in contrast has cut taxes for 98% of the population, giving the typical family about $2000 relatively higher income, while raising the tax rates on the wealthiest individuals by 3.8% (Compton, 2013). Britain followed a similar trend by increasing the tax-free personal allowance by £600 in 2008, and in 2011 financing that with an increased rate of 45% on incomes over £150,000 (HMRC, 2013). Corporate taxes require companies to pay tax on all profits earned. Corporate tax shares many of the same qualities as income tax when it comes to incentive within reforms. Like income tax, it is progressive and paid according to bands representing levels of profit obtained. Most of the corporate tax reforms have tried to create a fiscal environment that promotes competition and avoid tax-induced distortions. Reducing corporate tax rates can enhance investment in various ways. Globalisation has had a large impact on corporation tax around the world. Capital is highly mobile and so tax policy must be competitive to prevent large companies transfer pricing to countries with more economical tax systems. ...read more.